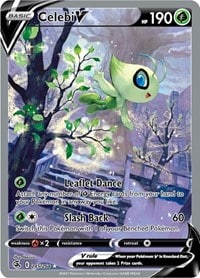 Pokemon Fusion Strike was a great way of departing the year 2021. Pokemon celebrated its 25th-anniversary last year, and it also announced a brand new anniversary set called Celebrations. Along with this, we also got an announcement for two new Pokemon games, one of which was a remake.

With such a fantastic year coming to an end, the company decided to give the fans a final gift in the form of this tremendous expansion that is Fusion Strike. We got a ton of great chase cards, which just look beautiful, to say the least. One such card from the expansion is the Ultra Rare Celebi V Alternate Full Art.

And in this article, we will deep dive into the lore behind this card, the illustrator’s motive behind the card’s design, and last but not least, the card’s current and future value!

As you may know, Celebi is a mythical Pokemon whose name has been mentioned in many Pokemon myths and stories. Though the existence of the Pokemon is known to us, the people in the Pokeverse still think it is a mythical being that is just a part of stories and myths!

Celebi can exist at different points in time at the same time. This may sound weird, but it can co-exist at other times in the fabric of space-time. The Pokemon is also known to bring prosperity to the forests by spreading and protecting the lush green areas on the planet which have been under attack by the humans.

This is one of the many Celebi V cards from the Pokemon Sword and Shield era of expansions. This one, in particular, is an alternate Art card, which has been really popular in the past couple of years thanks to their bolder and more unique design choices.

As we mentioned earlier, Celebi rejuvenates the dry and arid forests. The Celebi can be seen doing this in Ultra Rare Celebi V Alternate Full Art. The Celebi is happily healing the dry forests and the green leaves glowing on tree branches. The illustrator has very nicely illustrated Celebi’s power in a static image!

The illustrator of this card deserves all the credit for this fantastic piece of art that we see in Celebi V. The illustrator goes by the name Teeziro and is a well-known figure in the TCG.

As shown above, they have also created some fantastic cards for the Japanese VMAX Climax expansion. These cards will probably make a debut in the western market in the Pokemon Brilliant Stars expansion.

The current price of this card is around $50 based on multiple sites. Depending on the condition, you can get this card for much higher or much cheaper. As it is an alternate art, it has seen stable prices even after months from the release of the Fusion strike and may continue to do so in the future as well.