2021 was a special year for the Pokemon company; they celebrated their 25th anniversary. To celebrate it in style, they announced the release of the 25th-anniversary Celebration’s set, which came with many chase cards and reprints of older chase cards like the infamous first edition Charizard!

Apart from that, the Pokemon company also released a lot of significant expansions, which came with their own set of great chase cards. Pokemon Fusion Strike was one such expansion. The highlight of the expansion was indeed the Mew and Gengar cards which are some of the most expensive cards of 2021.

But one card managed to steal the show from these Pokemon cards, which is the Ultra Rare Elesa’s Sparkle Full Art card. So let’s deep dive into the lore, the value, and the trivia behind this card to understand the pricing of the card! 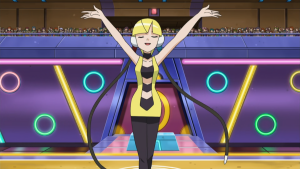 Elesa, as you may know, was a part of the 5th generation of Pokemon main series games; she was the leader of the fourth Gym and gave away the Bolt Badge when she was defeated. As you can see from her outfit and her gym badge name, she specializes in electric-type Pokemon.

She appeared once again in the Pokemon Black 2 and White 2 games and many times in the Pokemon anime. In fact, in the anime, she is a super popular character as she is a model. So expect this card’s price to be high because of Elesa’s popularity.

The card’s illustration is one of the most important aspects of it; without a good illustration, no matter the rarity of the card, the value will never rise. But thanks to the super talented Ryuta Fyuse, Elesa’s Sparkle Full Art turned out to be the best trainer card in Pokemon Fusion Strike.

The illustrator nails the design of Elesa with ease and adds much needle sparkle to the card. As Elesa’s Gym is very bright and shiny, the artists created a background that is very reminiscent of Elesa’s Gym and her style as a person.

Some other cards that Ryuta Fuze has created are the Nessa Supporter card from Vivid Voltage and the Rayquaza V from Evolving Skies.

Elisa’s Sparkle Full Art is probably the best trainer card in the expansion in terms of looks. And its value just reflects that, as of writing this article, the card can be bought anywhere between $15-$25. This value can change depending upon the condition of the cards.

At the time of the release of this expansion, this card was being sold for a whopping $45-50, but as the supply in the market increased, the value of this card decreased.