The art of Pokemon: Charizard V Star from Brilliant Stars!

The Charizard V Star is a part of Pokemon Brilliant Stars which will be released in the second month of 2022.

2022 has started with a bang for the Pokemon community. We’ve already received one of the most groundbreaking Pokemon games of all time in the form of Pokemon Legends: Arceus. And we soon will be getting a brand new expansion, Pokemon Brilliant Stars. Which seems to be borrowing the name from Pokemon Brilliant Diamond, a remake of the Sinnoh games.

Pokemon Brilliant Stars is an extraordinary expansion. It will be introducing a brand new game mechanic in the form of V Star cards. And we’re here to discuss one such V Star card which has managed to grab the attention of the entire Pokemon community at the moment.

The Charizard V Star is one of the first-ever V Star cards to be released in this Sword and Shield era. Charizard is one of the most widely known Pokemon and carries some clout wherever it goes. So in this blog post we decided to shed some light on this new Charizard V Star, its illustration, the future value, and much more! 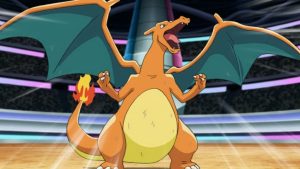 As we all know, Charizard is one of the starters from the very first generations of Pokemon. It has been the go-to start for millions of kids playing Pokemon Fire Red and Leaf Green.

Charizard is a Pokemon that is very proud of its power; it doesn’t like to engage in skirmishes where it’ll win easily. The Charizard would instead fly above forests to find capable foes to battle.

The fiery nature of this Pokemon not only spills into its personality traits but also in its powers. Charizard is known for it’s super powerful fire attacks!

The first-ever Charizard cards were printed in the base set of Pokemon. It was one of the most potent Pokemon TCG cards at its release. The card instantly became a cult classic among the community. It has become so valuable at this point that people literally pay a lot of money to buy them.

Recently many prominent figures in the entertainment industry have taken an interest in these Charizard cards, which reflects in their values. If you go onto some auction sites, most of the new 10 cards sell for more than $100,000!

The brand new Charizard V Star was illustrated by the super talented 5ban Graphics. An illustrator who has a massive footprint in the Pokemon TCG.

The Charizard V Star features the Charizard in the forefront of the card, coming right at you. The art style is very similar to 5ban’s other works; they stick to the 3d model designs seen in the Pokemon games.

The Arceus V Star has also been created by 5ban!

Based on how well other Charizard cards have sold over the last couple of years, this Charizard V Star will be no different. Due to the nature of modern Pokemon sets, the cards will eventually drop in value. But in the initial days from the drop, expect the price to be around $120!