The art of Pokemon: Shaymin V Star from Brilliant Stars!

The Shaymin V Star is a part of Pokemon Brilliant Stars which will be released in the second month of 2022.

2021 was overall a great year for the Pokemon franchise. They released the remakes of the 4th generation games, which were highly anticipated. They were celebrating their 25th anniversary. And they also gave the fans a special gift in the form of the Celebrations set, which had a lot of different reprints from the past sets.

2022 has already of to a great start as we got the brand new Pokemon Legends: Arceus, which undoubtedly is one of the best Pokemon games released since 2010. And now we’re getting the brand new expansion, which is the first of this year, Pokemon Brilliant Stars!

This expansion introduces the concept of V Star cards in the TCG. This new mechanic in the game is fascinating for the fans; hence we decide to some light on it. Today we will be focusing on the Shaymin V Star, which has been revealed to be a part of this expansion. So let’s get into it! 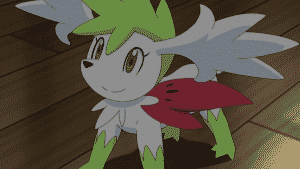 Shaymin is a grass-type Mythical Pokemon, just like Mew. It has two different forms, the landform and the sky form. The Shaymin V Star has the sky form of Shaymin on it. Shaymin more or less looks like a porcupine but with flowers and grass.

It is also known as the gratitude Pokemon by many in the Pokeverse!

Shaymin is getting special treatment in the brilliant stars expansion pack. It is the booster pack mascot along with the Pokemon God Arceus itself. Besides the Shaymin V Star, Shaymin V is also present in the Brilliant Stars set.

The Brilliant Stars set is the English Counterpart to the Japanese Star Birth expansion!

Coincidently, every V Star card mentioned above has been illustrated by the same artist, 5ban Graphics, known for their great work in the TCG space. Their art style is very similar to that of the Pokemon main series games, i.i.e, most of their illustration uses the 3d-model era Pokemon illustrations.

This makes their cards stand out from the rest in the TCG.

As the set isn’t out yet, it is tough to predict the prices for these cards, but we’ll try our best to give you a brief estimate. In the past, rare Shaymin cards have been sold for hundreds of dollars. And as the Shaymin V Star is introducing a brand new mechanic to the game, players would love to get their hands on it as soon as possible and make use of it in their decks.

It is quite possible that the prices go above a hundred dollars on the release and gradually come down to $30-40 eventually.