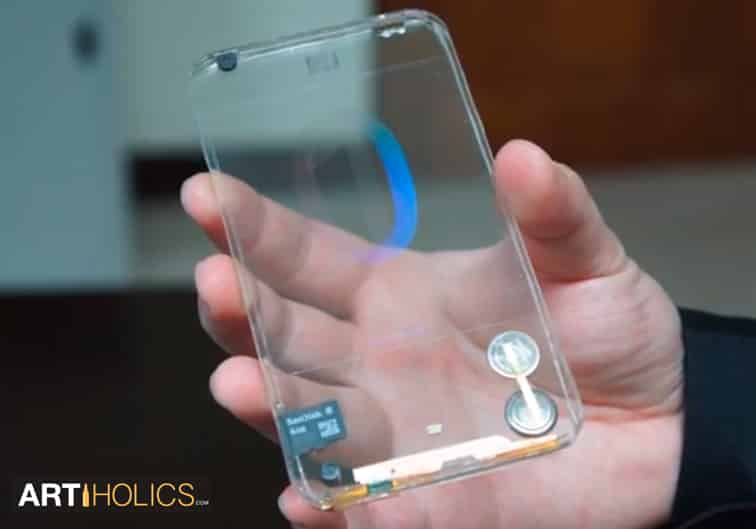 Clear or “invisible” tech always seems futuristic.  Soon our cellphones may be completely transparent.  Something that would blow your mind if you haven’t seen it already in science fiction.
I don’t know why this doesn’t seems cooler to me.  If I hadn’t seen and adjusted to all the various generations of phones leading up to this I would be blown away, but even though this isn’t fully developed, it already seems like it exists on the market.

Probably because we are programmed from infancy via advertising, film, TV, and art to register clear things, polished and perfect things, to be machine made. Since machines that could do this only have existed for the past 100 years or so, they appear to be futuristic.  So the more the fingerprint of man is removed from the art & design (the more unlike nature), the more futuristic it will register to our eyes.  The packaging industry has taken full advantage of this by wrapping everything in plastic, perfectly hermetically sealed to look glazed, futuristic, and beautiful on the store shelf.  We like clear, we like shiny.

Maybe it was because of seeing Wonder Woman in her invisible jet as a kid.

Or those cars in Tron.

This could carry over to fine art by having art being encased in clear Lucite which is somewhat of a trend this year.  But before that, just framing art behind glass gives it a clear futuristic clean quality a piece of paper doesn’t intrinsically have on it’s own.  It’s like a candy coating, a glaze of futuristic eye candy.

Like the mosquitoes encased in amber from Jurassic Park, even though they are ancient, it seemed futuristic.

And there is this guy with the fish.

A clear “half-crown” in The Fifth Element.

Precious jewels are pretty, and come in all colors, but the one without the color is the most valuable.

You may be asking yourself, what’s the next step?  Interactive holographic computers of course.

We don’t have to imagine it, it’s already been done for us in film many, many times. Clear screens in Avatar indicate that yes, this is the future.

Jarvis in Iron man. We already have a mental visual vocabulary for what this should look like and how it should function.  Screens that are completely clear but manifest images when they are touched.  But these are actually not screens but floating in space.

Something sci fi films have been promising us forever and have yet to fully deliver on.

If you think about it, before TV, and Film the best way to see what was to come in the future?  Gaze into this clear perfect crystal object.

Although, some clear future innovations were better left on the drawing board.