Has Photoshopping The Sexy For Print Gone Too Far? 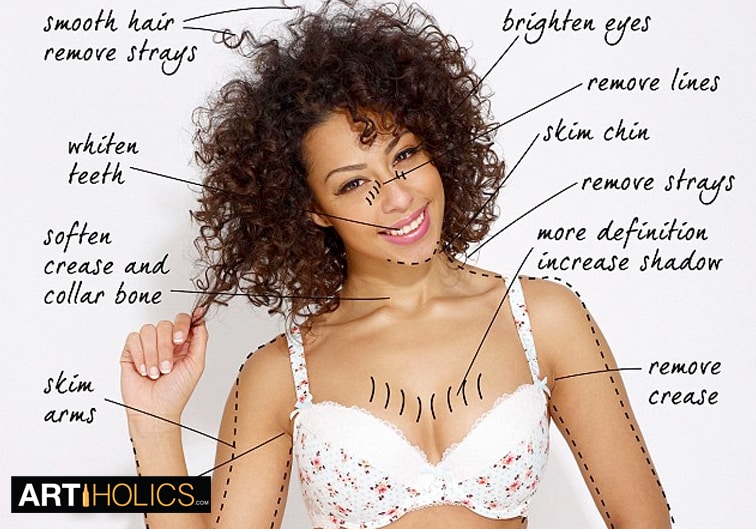 There is a point where a topic reaches critical mass.  Yesterday three different articles about “overdoing it” with photo-retouching or “airbrushing” of models in magazines, film posters, and advertising popped up in my feed.  So let me once again talk about this, because it is always funny to me when people (especially women) obsess over trying to look like the models they see in magazines, when the models they see in magazines probably wish they look the way “they themselves” appear in magazines, but will never actually look that “good” in real life.

The reason is my friends, what you see in magazines is not reality.  I’ve mentioned this before on ArtSucks.com, back in the late 90s when I was retouching movie posters for Indika I recall working on one poster featuring Patricia Arquette where I literally Frankensteined the finished pose out of 14 different photos.  You wouldn’t know it to look at it, and it is quite the magic trick.  Making a “perfect” image out of over a dozen not perfects, but that’s the brilliance of a good retouching.  Ever since Cindy Crawford lost her belly button, the secret has been out there, and as any good photo retoucher will tell you, it’s a lot of smoke and mirrors.

It’s actually rare to see a celebrity un-retouched.  Even the supposedly “candid” pictures of celebrities being “just like us” in the weekly rags are retouched.  It’s so few and far between that you see an un-retouched printed image, that when a celebrity does it, it is considered news.  You might remember back in September, 2002 when Jamie Lee Curtis (pre-Activia) decided to do a photoshoot with MORE Magazine without make-up and retouching and then with make-up and retouching . (Photos by Andrew Eccles)

“I don’t have great thighs,” she tells More. “I have very big breasts and a soft, fatty little tummy. And I’ve got back fat. People assume I’m walking around in little spaghetti-strap dresses. It’s the insidious Glam Jamie Jamie, the Perfect Jamie, the great figure, blah, blah, blah. And I don’t want the unsuspecting 40-year-old women of the world to think that I’ve got it going on. It’s such a fraud. And I’m the one perpetuating it.” – Jamie Lee Curtis

The first article I got shared to me wasn’t really an article, just an imgur page by greatnessoverload featuring a series of animated gifs, of before and after pictures.

These are some examples of really good retouching. Here are some bad ones.

The second article I noticed today was from a dailymail article about how a store called Debenhams has declared they will no longer be retouching lingerie photos.   According to the article:

The high-street department store puts and end to such images as they ‘want to help customers feel confident about their figures without bombarding them with unattainable body images. Recent research shows that half of schoolgirls as young as 12 are unhappy with their weight and some are skipping meals in an effort to slim, ‘due to exposure to airbrushed images’.

‘We want other retailers to follow suit and encourage positive body-image through minimal retouching rather than bombarding them with unattainable body images,’ said a spokesperson.

Good luck with that.  Maybe in England, but in America there is never a photo in a magazine that hasn’t been tweaked or touched up in some way, even if it’s a really small thing like bumping up the contrast, photos get retouched.  The technology exists, and there is rarely any turning back on technology.

The third article I saw today was on theinterrobang, titled Extreme Retouching: Unrecognizable Movie Posters, and it really hit home because it is aimed directly at Movie posters and their “over-photoshopping” to the point where the characters in the poster are nearly unrecognizable in relation to the real life humans who played them.

I remember for a few movie posters the main image we wanted to depict just simply didn’t exist.  Getting the Actor to pose in the costume and hair of the film after they have moved on to other projects is sometimes impossible, so we had to shoot a body double.  And is how you end up with shit like this...

…and this.  Neither of which I worked on by the way.
But that is one situation where Photoshop comes in handy (and if you are talented enough) nobody will be the wiser.  But when it comes to making the actors in the poster more attractive ie: slimmer, younger, etc.  That’s where the retouchers can get a little out of hand, via. theinterrobang.

Bruce Willis has different body syndrome, Matthew Perry has tiny head syndrome, and who is that weird guy they shoehorned in between them?  Scorsese?