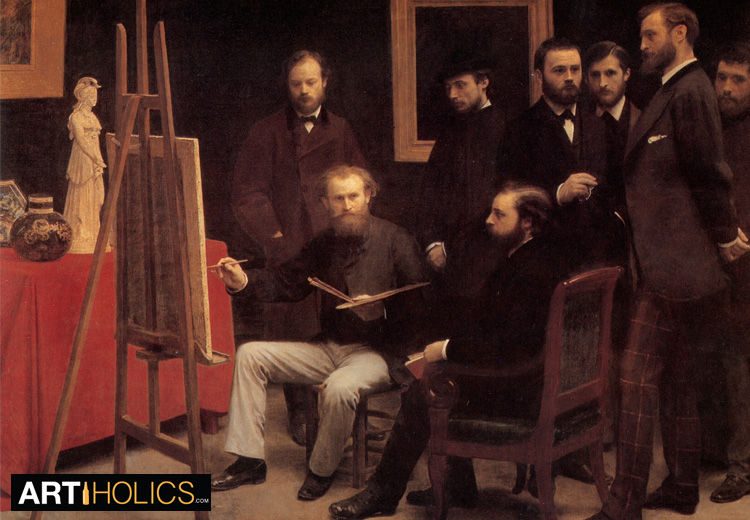 Each year at this time I make the trip to my childhood home and stare at a refrigerator full of holiday cards from distant relatives and old family friends. Many of these cards include an annual photo, each year the same people in the same configuration, in front of the same fireplace, or a new vacation location. In the spirit of the season, here are fifteen artworld family photos.

Merry Christmas from the Impressionists

1. Above is the painting A Studio in the Batignolles by Henri Fantin-Latour. This image depicts a bunch of the French Impressionists, including Manet, Renoir, Monet, and the critic Emile Zola. An oil painting of an artist’s friends and colleagues that probably took weeks to complete really makes you appreciate the immediacy of Instagram.

Let It Snow, the Futurists

2. This is a Futurist banquet in Tunis with Filippo Tommaso Marinetti, author of the Futurist Manifesto, front and center. (image via)

3. Here we have the Ashcan School artists at the painter John French Sloan’s Philadelphia Studio in 1898. The original “Philadelphia Five,” included the great American artists George Bellows and Edward Hopper, among others. (image via)

4. Meanwhile, over in New York is the Steiglitz Circle. This is an early photo, so Alfred is in there, but not Georgia O’Keeffe or Arthur Dove.  (image via)

5. This is a photograph from the Meeting of the Contstructivists and Dadaists in Weimar, 1922. Pictured here are some of the movements’ heavy hitters like Theo van Doesburg in the middle with his makeshift hat, El Lissitsky, Tristan Tzara, Hans Arp, and Hans Richter. (image via)

Happy Holidays from The Bauhaus

Seasons Greetings from The Surrealists

8. While Frida and Diego have a variety of options to choose from for their annual holiday greeting card, we need at least three people to fit in our group theme. Here they are with architect Albert Khan. (image via)

Celebrate The Season with The Irascibles!

Merry Fuckin’ X-Mas from The Factory

10. This Richard Avedon portrait of the Warhol Factory, “Andy Warhol and members of The Factory, New York, October 30, 1969”, would actually be a really amazing thing to see on your mom’s ‘fridge. In addition to some beautiful feathered 1970’s hair and a whole lotta D, this photo features the fabulous Warhol Superstars Viva, Candy Darling, and Brigid Berlin. (image via)

12. Here is another group shot that includes man-about-town Andy Warhol. The staged group photo seemed to be a popular format in the late 80s. (image via)

13. This image which features artists from music and film as well as art such as Lorna Simpson and Spike Lee. You can see these people featured in the documentary Brooklyn Boheme, which is available on Netflix. (image via)

14. While flipping through a recent Art in America print issue, I clocked this double page spread which is not a cover photo for a feature on the auction house, but an advertisement. An advertisement for what, exactly? Well I’m not quite sure other than that these Christie’s staff are serious, they have names, and they sure seem to like hanging around on installation equipment. It mostly bums me out, thinking about the art handlers who had to unpack, move, place, and then re-crate those big Basquiat and Mark Grotjahn paintings in the background for this casual photoshoot. (image – author scan from Art In America November 2013)

15. And finally, everyone’s favorite bunch of reality artists – the cast of Work of Art Season 1. Just kidding! (image via)