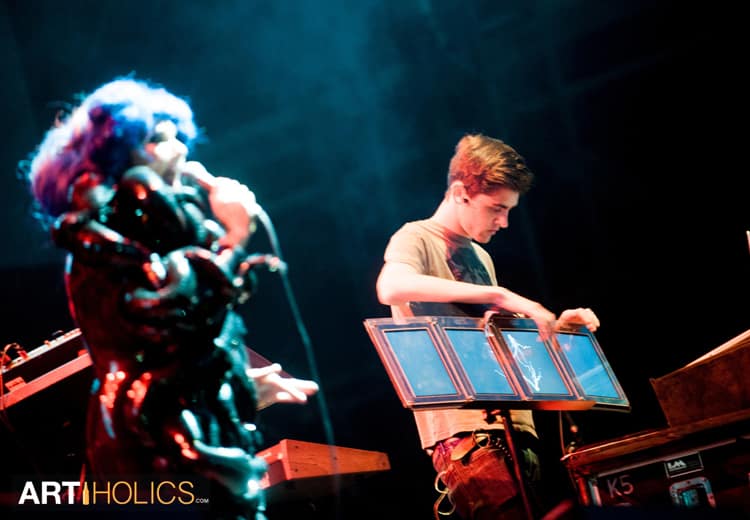 Last month when it was announced that Björk’s Album of apps Biophilia was being purchased by MoMA for its collection I noticed they hadn’t mentioned Max Weisel.

What I thought was the most profound thing at the time the album was designed was that a large portion of the apps on the album were designed and programmed by a teenager.

I met Max at the 2012 Volta NY pre-party  at Villain in Williamsburg few months before this article in Vice was written.  He told me about how he and developed apps for Björk’s Biophilia album, and that they constructed a playable iPad rig on stage, so he could control a lot of the music and was now touring with Bjork.

I was a huge fan, and had a huge crush on Björk in my teenage years (who didn’t?), and he introduced me to a few of her Icelandic choral background singers who were also at the party; Ester Auðunsdóttir invited me to come to their show at Roseland ballroom the next night as their guest .

Needless to say, the show was an INSANE mix of music, singing, performance art, and technology.

I caught up with Max in June 2014.  We chatted online, me from my studio in NYC, he rather appropriately on a tablet in an airplane flying to California. We talked about the inclusion of the app in MoMA’s permanent collection, his involvement in the project at such a young age (he designed the app at 18) and how it all came together.  Enjoy the Artiholics Exclusive interview with artist / programmer Max Weisel.

Artiholics:  So how did Björk find you in the first place?

Max Weisel: At the beginning, Björk had the idea to do an app album. Normally, when someone goes to do a music video or something like that, the label has people they can reach out to. They know production companies and directors. Björk herself knows a lot of people too of course. However, when they started this project (early 2010) no one was making apps for albums.

She was talking with her manager who she’s been with for 30 years and he suggested they reach out to the developers of her favorite apps. I had made some small apps at the time. Nothing too crazy in the music / creative space. I woke up one day to a comment on my wordpress blog asking for my info on behalf of Björk. I actually laughed it off and assumed someone was just messing with me. However, curiosity got the best of me. I started looking into the name attached to the comment and found a record label and a phone number. I called them up.

“Hey, this might be odd, but someone wrote a comment on my blog asking for my info for Björk”

Artiholics:  Where were you living at the time?

Max Weisel:  Arizona with my parents, I was 18 and had just graduated high school (barely :P).  The person on the other end of the line was like “Yeah! Thanks for reaching out. We’re still figuring this out, but let me get your info and I’ll shoot you an email.”

A week or so later, I got an email from Björk and her assistant with some of their ideas and the themes she was thinking about for each of the songs on the album. We kept emailing back and forth for awhile and I started putting rough concepts together.

At some point, she sent an email bringing myself, Scott Snibbe and the guys from Touch Press together. We were the ones whos apps she was a fan of. We had all gravitated towards different app concepts and soon became responsible for them.

Do you know which apps of yours in particular was she a fan of ?

You designed it in high school?

I wrote it with a friend in high school yeah. I wanted to make an app to put in the app store for the launch of the iPad. I had never really done any custom graphics programming before so that was my little tutorial into it. It’s not very difficult to draw lines and circles

Makes sense, to be right on it when it when the initial iPads get shipped.

I was planning to wait in line for it. I wanted something small I could play with when I got it. It’s basically an iPad implementation of BallDroppings. I had made some minor modifications (like snapping the pitch to a pentatonic scale). Honestly, it’s embarrassing that I didn’t give credit to the original. I didn’t think much of it as a kid.  I’ve since talked with the creator of the original, but I haven’t touched it since release.

Anyway, when we were all brought together, I chose Solstice, Moon, and Dark Matter. Scott’s studio picked up Virus, Mutual Core and Thunderbolt. Touch Press did Crystalline.  So we built all of the apps and released it.

So how did you leap from that to making the mulitple iPad rig and joining Björk on tour?

Björk started putting together the tour and set up a rig with the custom instruments she had built for the album. They were prototyping it in Manchester where the first set of shows were scheduled to occur. She sent me an email asking if I wanted to do apps for it. I asked what she wanted me to do. She told me to build whatever I wanted. For the festival shows, we played some of her older stuff. I would ask her about the songs, and she would tell me to build everything from my own point of view. She liked the fact that I didn’t know all of the details about her earlier work and wanted a fresh perspective on it.

I basically set out to develop apps that would allow the audience to understand what I was playing.  We had an ableton live session on stage that controlled everything when I started. As we toured, I started writing apps to slowly replace parts of it. So I could play things like the tesla coil and synths with the iPads

Crazy, the tesla coil was insane, I was near by it and not only did you feel and smell the electricity, but the ability for the coil to make music was insane.  The crowd a Roseland went nuts.

Yeah. I had never played a live show larger than like 5 people before. It was an incredible experience. Especially since we played residencies. We spent a large amount of time at each location.  I was on the tour for NY, South America and Europe

So the tour ends and two years later, MoMA buys the app for their archive. How did that evolve?

Paola (Paola Antonelli, Senior Curator, Department of Architecture and Design at MoMA) says she was interested in acquiring it the day it came out in 2011. The whole process started a month or so ago though. They reached out to us, and wanted to figure out how to set everything up. They wanted the source code, and to do interviews with everyone on the project. I believe they have the source code now. They said they’ll do interviews down the line once they figure out how to properly archive this thing.

Yeah, but Paola feels strongly about this. This isn’t her first technical / new media acquisition.  She actually just gave a great talk about it at EyeO conference a few days ago. Not sure when the videos will go up, but you should check it out. She goes into all of the details of previous acquisitions and touches on the Biophilia one

This is really interesting for a museum of their caliber to be embracing new media art like this don’t you think? this could be like It could cause a  paradigm shift acquisition as far as iPad / visual / music. If MoMA leads the way, other museums and galleries will follow.

Oh totally, I believe it will happen. Digital work is really starting to take off. It’s a new medium, and it’s not going away anytime soon.

So you are living in California, what kind of projects can we look forward to seeing on the horizon?

Yeah, I run a small R&D lab in San Francisco called RelativeWave.  I’m working on mostly personal stuff at the moment. A few cool collaborations. Stuff I’ll be able to talk about in a few months.

You should consider doing a TED talk, it would be fascinating.

Some day. I’ll let you know when they send me an invitation.

Expect to see more great things from Max Weisel in the coming years, and Björk can’t lose, she’s getting her own massive retrospective at MoMA in 2015!