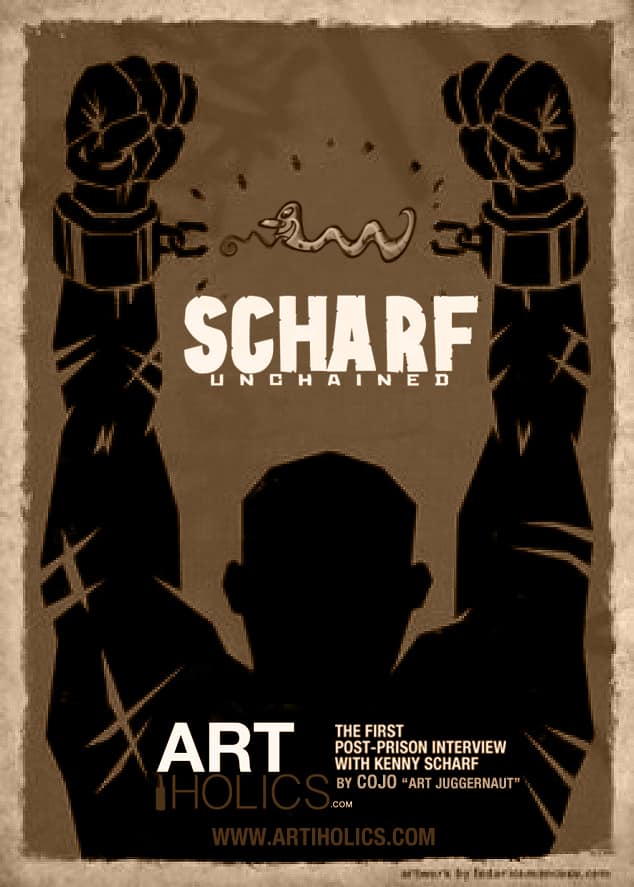 New York, NY – Monday, April 22nd, 2013
This morning I broke the story on ArtSucks.com that art legend Kenny Scharf had gotten arrested last Friday for tagging a building in Williamsburg, Brooklyn with the drawing of a black and white smiling cartoonish snake in profile, slithering, with a big curly tongue.

If you are a fan of Kenny’s work, with just that simple description you can now draw a mental image of this snake in your mind.  This is how iconic the man’s work is, and it almost seems bizarre that he got arrested.  It would be on par to Howard Stern getting an FCC fine for using a few foul words on mic at a bachelor party.  After navigating all the crazy web traffic the article sent my way, I caught up with the artist for a quick interview about his twenty hours in the Brooklyn Tombs:

Artiholics: “What was the first image or words you drew / painted on property you didn’t own, and where was it?  I personally have been asked many times if I do graffiti, and I never have.  There must have been something or someone that encouraged you to do it that first time.”

Kenny Scharf: “The first image I drew on the street was a TV set with the words the Jetsons inside probably 1978 and was somewhere in Chelsea I think and it was Jean-Michael {Basquiat} who handed me his marker after tagging Samo. We were both teenagers.”

Artiholics: “I guess it’s always been an unwritten law of the streets, that anyone who does any sort of “street art” isn’t really credible until they have been arrested.  How was your recent stint in the clink?”

Kenny Scharf: “I don’t recommend anyone to go to jail whether it helps you get street CRED. i have been there before for the same reason over 30 years ago but that’s another crazy story much crazier than the recent one. I didn’t really count going back I thought one time was enough so I’m definitely not planning on third visit. The only reason I got caught was there was someone with me and I assumed he was watching my back which wasn’t the case if I have been alone this would not have happened.”

Artiholics: “The amount of man hours you put into making the drabber parts of the city more colorful and vibrant, seems kind of weird to be throwing you in the same cell as hoodlums, rapists, and murders.  What was your prison experience like compared to your last NYC stint 30 years ago?”

Kenny Scharf: “The experience I had this time compared to 30 years ago is similar yet very different. the first time the cops physically abused me and this time nobody touched me except for the handcuffs and frisking. The whole system itself seems to be much worse than 30 years ago much more chaotic and the crowds we were all packed like sardines and it just felt like half of the black kids in Brooklyn were in there with me I mean I couldn’t believe HOW crowded it was.”

Artiholics: “You seem to love to work big, I remember that show you had back at PS1 in 2009, your pieces were gigantic.  Did you start out going big on walls, or canvas?”

Kenny Scharf:  “I always liked the New York school and wanted to be a part of that so big paintings were definitely part of that. I also love cinema and big paintings can have that vibe. As far as murals go the bigger the better.”

Artiholics: “It is always weird to me to see people doing throw-up tags over your pieces, like the big mural on Houston you did which kept getting bombed.  Do they not know their history, or are they just trying to get some quick notoriety by being completely disrespectful?”

Kenny Scharf: “I think the latter half of your question is the correct one just want to be noticed and by choosing the most noticeable wall in the city they feel some notoriety. I have the unfortunate luck to be the only artist on that group that didn’t get a protective coating which allows you to rub off the tags. so I had to fix it myself it was not Fun.”

Artiholics:“People are speculating, where exactly is this building you were tagged tagging?  It should almost get landmark status now. People should be taking Instagram #selfies in front of this now-iconic piece.”

Kenny Scharf: “It’s around the corner from my mural on Metropolitan there’s three tags and they’re all on Morgan Very close to Metropolitan. I was having a grand old time until the handcuffs.”

Thanks Kenny, and if anyone does find the piece, be sure to take a picture with it and send it here.  I’ll put together a gallery of them.  A little shrine to the piece that landed Kenny Scharf in jail. – Cojo

If you want to see the snake in question (and take a #selfie in front of it) , you will be catching an L Train to Brooklyn. If you want to see his most recent work that isn’t on the side of a building, Kenny Scharf is fresh off of the opening his new show titled KOLORS at Paul Kasmin Gallery featuring three large sculptures, and ten new paintings. The show is on view till May 4th at 515 West 27th Street, New York, NYC.