Allentown Local Artists Mix It Up 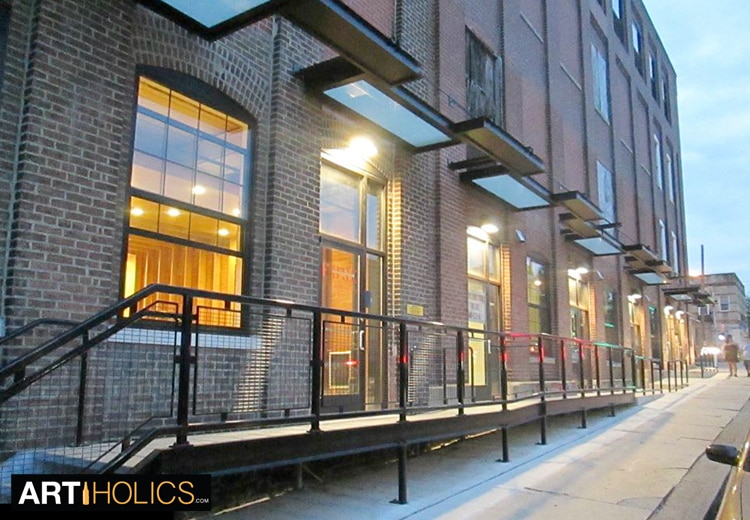 I found myself venturing over to The Cigar Factory, an old….cigar factory, converted into artist studio spaces. This was to be their fourth and final installment of  3rd Thursday, an art event where FUSE  joins up with the space to showcase their collective in what they call, NOW.

The event began at 5pm, which is a bit different than most. Starting at rush hour is very difficult in this urban area. And I found myself stuck in traffic till 6pm. Finally arriving, I still was early and things were running behind schedule. The 1st thing I encountered was a blank canvas, stretched across a wall, for people to come over and leave their expressive mark.

Since the event was just getting going, I went over and made a textural mess for others to come over and build upon. Just like objects in space, the more mass you buildup, the more gravity you create, bringing other objects over towards you. And as I built up my area, I did notice others begin to come over and work on their own things, right around where I laid down a foundation.

Although, at first, I was not feeling like being put into a position to have to make something at an exhibit of others works, I was glad I did. And it made for an easy segue to create a dialogue between others attending.

Moving on, I headed down the corridors, beginning with pieces which embraced the “Classic” 80’s Graffiti Movements. There were works inspired by SAMO, a.k.a Basquiat, The Big Bubble Letters of Philly’s early scene and Characters, reminiscent of the old subways in NYC.

Through the retro filled hallways, I entered into the studio spaces. Each space was given to an artist, and setup however they wished to showcase themselves.One room was setup not only with their pieces, but also had works being created in the moment and even had a musical performance, mixing the whole thing into a play on each other.

Another room took all the industrial pipes and ducts, and had them coming out into the room, from all different angles. And even one duct went outside of the building.

Further down the rabbit hole, I came to a dark room, where I was handed a candle to light. I entered in and found small mold impressions of different faces, which when lit by the flickering candle, gave the faces a life of their own.

After roaming from space to space, I headed to the front, where the collaborative mural piece was now in full swing. My mass build up had now 5 people hovering around, adding to the globular cluster I began earlier. Making my way through, I went over and got some snacks and drinks, of course!

Now, that I had gone and taking in everything, it was time for me to make this evening into a whole other experience. I had gone and spent over 2 hours talking with the artists and really looking into what was created. But, when I go out, I like going beyond the surface and getting into the belly of the beast.

I began by getting goofy and throwing out ridiculous and even inappropriate conversational starters, which anyone who knows me…knows all too well of where my brain can go. In most “normal” gathering situations, this could be a really bad idea and just cause people to move away from you as fast as possible. But, not when you are out amongst creative types. It tends to open the gates for others to run with their own sick ideas and it begins to domino and make the whole night less pretentious.

As the conversations got weirder and weirder, I found myself with a group of local musicians from the neighborhood, who brought me around the not so accessible parts of the building. Through the stairways, we went up, then down into the basement, where we came to an apartment setup. Down there was some people hanging out, working on editing a music video they just shot. I never figured out who was staying there or who knew who from who I was with. But, none of that mattered and I just rolled with everything. After 20 minutes, I felt compelled to return to the event.

Returning back, people were all over the place, giving way to the holiday spirits. And after sharing in the festivities for another hour, I was ready to call it an evening.