Add To Your Que: Her Master’s Voice 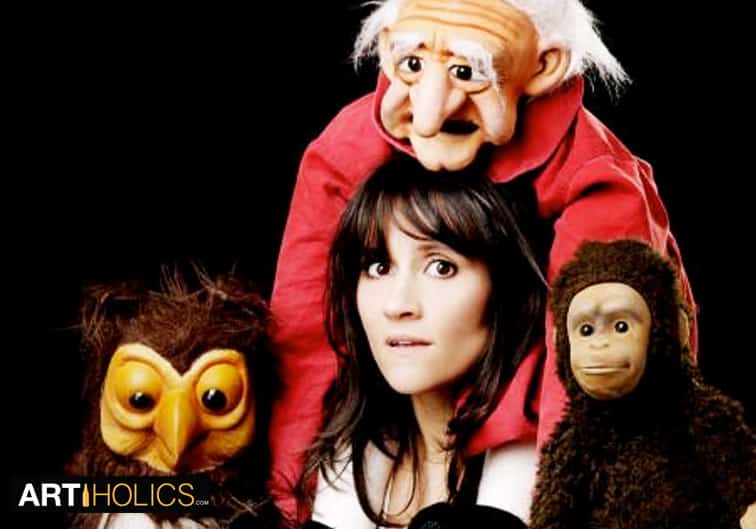 Over the weekend I did a marathon session of HBO on demand, and the first series I knocked out was the Christopher Guest comedy series Family Tree.

If you haven’t seen it, it’s a story of a British guy who is left a trunk by a deceased relative, and in decoding it’s contents is set on a transcontinental adventure to trace back his family tree.  His sister on the show is played by Nina Conti, whom in going through some emotional turmoil and has subverted some of her subconscious banter into a hand puppet named Monkey.  A ventriloquist dummy which is undoubtedly one of the funniest parts of this quirky show.

I hadn’t heard of Nina Conti before Family Tree, and was pleasantly surprised to find that she is an accomplished ventriloquist and comedian, and Monkey is her primary puppet.  Even better, there is a recently released to Netflix documentary she self funded and filmed in 2009 (released in 2012) titled Her Master’s Voice, which is a touching and darkly funny.

It chronicles her trip to America (Kentucky) for The World Ventriloquist Convention in the wake of the death of her ventriloquism mentor, Ken Campbell.  She is left all 6 of his puppets in his will, and she decides to lug them all along with her to America, to try to lend them a voice, if for the last time.

Part of the journey is to visit Vent Haven, a museum that serves as a resting place for puppets of dead ventriloquists (yes, depressing).  She plans on donating one of Campbell’s puppets (you will have to watch to see how this plays out).

If you enjoy her humor, and are in England, you can see Nina Conti and Monkey Performing Live on tour in the UK through October – tour dates here.