What is the One Piece Card Game?

The execution of the pirate King Roger set off the age of the pirates, not only in the world of One Piece but also in our real world. The adventures of Luffy and his crew across the grand line have captivated anime fans for decades!

This year marks the 25th anniversary of this fantastic franchise and what better way to celebrate this feat than creating a brand new Card Game around the anime!

One Piece features a vast array of characters; the story has been going on for 25 years, so the Card Game won’t be running out of new cards anytime soon. This gives the CCG an advantage as it won’t get repetitive, a problem affecting the MHA CCG.

It is set to release on the 2nd of December, which is not very far away, and it might’ve released by the time you read this blog post. But you’re not here to know the release date; you’re here to understand what the fuss is about; what is the One Piece Card Game?

What is the One Piece Card Game?

As with any popular anime, a CCG for the massively popular One Piece was inevitable, but this time, the CCG is way better than most anticipated. Many thought it would be a cash grab by Bandai Namco, selling a generic Card Game with One Piece characters.

But this is far from the truth; the One Piece card game seems only second to the Pokemon TCG.

The rules are pretty simple. You create a deck of 61 cards. In each deck, there can be 1 Leader, 10 Don!! Cards, and 50 other cards (you can have four cards that have the same number)

The goal is to drain the HP of your opponent’s leader, but it’s not as easy as it seems. You can also play character cards that have their unique abilities, plus there are stage cards, triggers, counters, and much more.

You should’ve gotten excited about getting into the card game by now. You can pick the starter decks or booster packs for the first expansion, ‘Romance Dawn, ‘ online or from a hobby store near you!

The Card Game is genuinely one of a kind and features some great-looking cards. Here are some of our favorites! 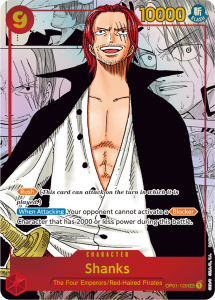