The art of Pokemon: Zekrom Full Art from Brilliant Stars!

The Zekrom Full Art is a part of Pokemon Brilliant Stars, released in February 2022!

Pokemon Legends: Arceus was just released a few weeks ago, and soon we will be getting Brilliant Stars as well. It looks like 2022 is off to a great start. Brilliant Stars is showing a lot of promise, it has some inspiring cards in it, plus it is introducing the V Star mechanic into the TCG.

Along with V Star cards, Brilliant Stars also adds a lot of full art cards that will feature trainers along with their Pokemon. This has led to a lot of hype surrounding its expansion.

One such card in the expansion is the Zekrom Full Art, which features N. He can be seen riding his Zekrom, and the card just looks impressive, to say the least. So let’s deep dive into its lore, some fun trivia, the illustration, and most importantly, what value will it hold when it releases! 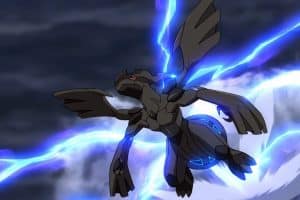 Zekrom is one of the most badass dragons in Pokemon. Its tail produces anti-gravity fields which allows it to soar through skies with minimal thermodynamic or gravitational interference. It is known to cause thunderstorms in the Unnova region!

Zekrom is embedded in the myths of the Unnova region. It is said that Zekrom sided with the younger brother, who stood for ideals!

Zekrom is a pretty popular Pokemon in the TCG. It has been a part of 14 different Pokemon TCG cards and made a debut in the Black and White expansion.

Most of the Zekrom cards out there are Lightning-type or Dragon-type basic Pokemon.

Thre Zekrom Full Art feature N, a part of the stories that unfolded in the 5th generation Pokemon games. N is the puppet leader for the notorious team plasma and wanted to create a separate world for Pokemon and Humans.

The artwork on this card has made it so popular even before its release. The Zekrom Full Art was one of the first cards to be revealed to the public, and since then, the fans have been waiting patiently to get their hand on this beautiful piece.

The Zekrom Full Art has been illustrated by the talented Akira Egawa, who you might recognize from the Mew V Max from fusion Strike and Umbreon V Max from Evolving skies. Their almost pastel-like artwork stands out in the TCG.

The Zekrom Full Art might be sold for $50-80 in the first couple of days of the release. But after that, expect the price to drop down and stabilize. As the card is one of the most coveted ones in the set, the price can exceed $60, but there are so many great cards that Zerom might get overshadowed.

Recommended – The art of Pokemon: Umbreon V from Brilliant Stars!