The Mewtwo V Alternate Art is a part of the Pokemon GO TCG expansion pack!

2022 has been an excellent year for the Pokemon TCG; we got two awesome expansion packs in the form of Pokemon Brilliant Stars and Pokemon Astral Radiance. These two expansions featured some great cards, some of which are selling for hundreds of dollars on the reseller’s markets!

Similar to these expansions, Pokemon has come out with the Pokemon GO expansion pack as the name suggests. The expansion revolves around Pokemon GO. It features Pokemon mostly in the 3d model form we’re used to seeing on the Pokemon GO mobile game.

The expansion has been getting a lot of traction recently as some of the cards from the expansion are blowing up. One such card is the  Mewtwo V Alternate Art, probably the best card from the expansion. So we decided to a blog post highlighting its origins, value, illustration, and much more! 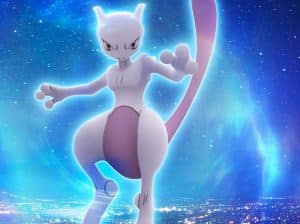 The card features the beast legendary and probably the strongest Pokemon from Pokemon GO. Whether the main series games, the mobile games, or even the TCG, Mewtwo is a force to be reckoned with; its pure psychic strength makes it a great Pokemon on any team.

Mewtwo has been a part of the Pokemon universe since the arrival of the first Red and Blue games. Pokemon fans have loved it since it was first revealed, and it will probably stay this way until the franchise survives!

Mewtwo has such star power that every set it turns into; it manages to become the most popular card!

Mewtwo V Alternate Art isn’t the only Mewtwo card in the Pokemon GO expansion; it also features the much-coveted Mewtwo V Star and its Gold and Rainbow rare versions!

Mewtwo V Alternate Art shows Mewtwo in a very menacing way; it can be seen floating up in the sky in a densely populated area. This pose is very reminiscent of the scene in the Pokemon Detective Pikachu Movie, where Mewtwo is seen similarly hovering in the sky in a similar location.

Not only that, the Mewtwo is in the 3-d form we see in Pokemon GO. The card’s perspective is such that Mewtwo looks down upon us with a menacing glare!

Mewtwo V Alternate Art, as of now, is selling for around $70 on multiple different reseller sites. This price is subject to change depending upon the condition of the cards, but you’ll most probably see the card being sold at $70.

As for the future value of the card, it looks bleak at best. The card’s illustration isn’t that jaw-dropping; we have gotten used to awesome Mewtwo cards in the past, the cards that are a hundred times better than the Mewtwo V Alternate Art.

The card might hold its value, but in the long run, the Mewtwo V Alternate Art doesn’t stand a chance against some of the best Mewtwo cards from the Sword and Shield Era!