The art of Pokemon: Shiny Mew from Celebrations!

The Shiny Mew Secret from Pokemon celebrations has been on every Pokemon TCG collector’s mind for a while now. The card has to be one of the best pulls from the set, apart from being a mew, which in itself is quite a nice pull, it is a shiny mew! This has skyrocketed its price since the release.

The Celebration’s set was released in the celebration of the 25th anniversary of the Pokemon franchise which has been growing consistently over these years. Amd mew is an OG in this franchise, it has been a part of the game since the start and also is the ancestor to every other Pokemon!

A lot of people are very keen on getting the shiny mew, but do they know the story behind it, and who created it. These are important details every collector should take into consideration before investing. 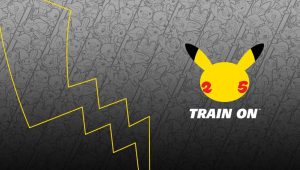 The Shiny Mew Secret Rare was released in the Japanese 25th Anniversary Collection subset at first. And it wasn’t the only Mew in the set. There is yet another Mew card which is a regular card and still has petty decent artwork on display. Both cards have Mew on them as said earlier but one of them, the full art one, has a shiny Mew!

Mew is a Psychic Type Pokemon as we all know and probably the ancestor to every other Pokemon we see in the world of Pokemon. Mew can infact learn any known Technical Machine, Technical Record, Hidden Machine, and Move Tutor move, which just goes to show how powerful this little pokemon can be at the time. Mew is also a popular choice amongst competitive Pokemon players both in the TCG and in the game.

Mew has also seen a lot of screen time in many notable Pokemon movies, the first Pokemon movie heavily involved mew in it!

The Regular Mew has been illustrated by Yuu Nishida and the shiny Mew by Saki Hayashiro.

Saki Hayashiro has been making TCG cards for a while as her portfolio of TCG cards is immense and mostly contains cards where the Pokemon is at the forefront. Some of the most notable cards created by Saki Hayashiro are given above.

As it is a Mew card and a part of the much-anticipated Celebration’s Collection Set, only a few people will be able to get their hands on it. This in turn means higher prices for the secondary market where the value of the cards is seen. The regular Mew is sold for anywhere between $0.5 to $1, due to it being an abundant card.

The Shiny Mew is the card that every Collector wants and this is reflected in its current value. As of now, most of the sellers on TCGplayer.com and eBay are asking a lot of money. You can expect the prices to be in the range of $66-80!

As the supply is limited for this set and the card has great artwork. The prices may remain consistent for a while. But the Shiny Mew has all the things going for it in order to skyrocket to an even higher price point.

Recommended – The Art of Pokémon: Everything you need to know about Charizard Vmax from Shining Fates!