The “Scope Widening” Effect of the Summer Art Festival 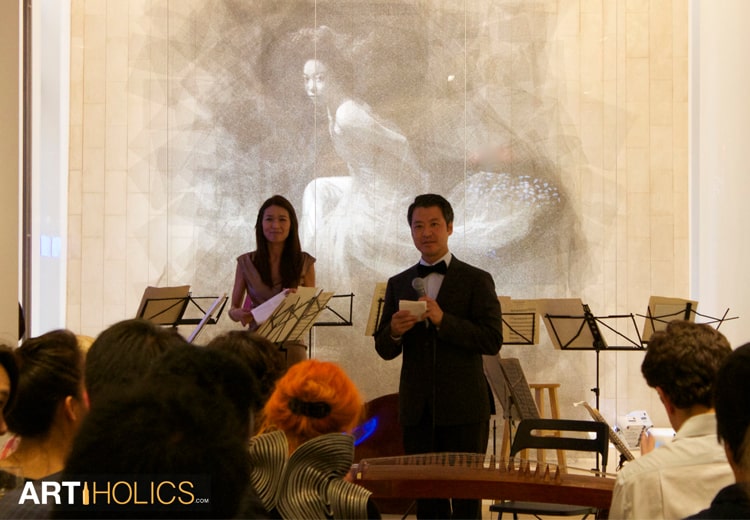 The Summer Art Festival at the Waterfall Mansion has been attracting a plethora of personalities since its inception. Artiholics covered the opening back in June when SAF14 opened its doors, and from then onwards the mansion has been exerting a gravitational influx over the NYC art world. That is not particularly surprising: we are talking about a seven level town house in the Upper East Side devoted to the Arts from the ground up.

Stepping into the mansion you will find unique carpets made using ancient Tibetan hand-knotting techniques that have been thoroughly researched and meticulously reproduced by Joseph Carini. Sit and you’ll rest on the sculptural designs of Antonio Pio Saracino, whether reclining in his Hexa lounge chairs or straightening back upright in the slightly flexible steel of his Deer chair. Look around, and you’ll meet a collection of cutting edge contemporary and renowned modern art.

You will be amazed by the shockingly hyperrealistic figural human sculptures brought to life with the help of the most cutting edge Hollywoods special effects technique by artists Jamie Salmon and Jackie K. Seo. Maybe not so coincidentally, Academy Award  winning photographer and filmmaker Zana Briski hangs two of her depictions of nature in the same floor, along side the realism of Robin Antar, an artist who enjoys enlarging consumer brands in rotund marble reproductions.

The accumulation of surprises throughout this UES space has impacted the public with an overall sense of awe that has rapidly communicated and widened the scope of its visitors to an international sphere. The chief curator of the Museum of Contemporary Art of Buenos Aires, a board Director from the Tel Aviv Museum of Art, and international art experts such as Michela Bondardo  and Peter Frank have shared the magnitude of the  impact of the works within this space.

This process of “scope widening” was recently reinforced with a concert -the Summer Musicale- where East and West met harmoniously. Members of the Shen Yun Performing Arts at Lincoln Center and the Shen Yun Symphony Orchestra at Carnegie Hall played traditional Chinese music. They were followed by the Solisti Ensemble and its selection of classical European music including the anonymous Romanza de Amor (for violin and Spanish guitar) and, the once considered unplayable, Tchaikovsky’s Violin Concerto in D major, Op. 35.

It was a frank dialogue between the East and the West. The East represented by the guzhen, a pluck-string instrument (part of the zither family), which is one of the most ancient Chinese musical instruments. The West represented by two violins. One manufactured by Giuseppe Guarnerius “del Gesu” in 1741, – a prime example of Antonio Stradivarius’ school from his Golden Period; and a second violin by J.B. Guadagnini, manufactured in 1751. The value of the violins may be ineffable but their prices were discussed in several circles and estimated altogether over $30M.

The Summer Art Festival continued its “scope widening” with the Summer Tasting, a culinary exclusive event where artisanal award-wining chefs from Korea, Taiwan and India offered samplings of their latest creations.

And finally yet another international audience expansion: a private event for the Unided Nations Foundation and the Caterpillar Foundation aimed at fostering a conversation about innovative partnerships and global development, within the enlightened atmosphere of the SAF14 art collection.