Midnight (Top 8) is a part of My Hero Academia: Universus!

My Hero Academia is one of the best shounen anime that is out right now, the anime has been steadily gaining a cult-like following over the years, and in 2022 it is probably the biggest shounen. The anime features a ton of great characters loved by the franchise’s fans!

The popularity of the characters isn’t limited to the protagonist but to many other side characters as well. So to capitalize on this fame, Jasco games came out with the first-ever My Hero Academia Collectible Card Game. At first, there was no interest in the project as not every My Hero Academia fan is fond of cards. But, since the cards were released, the hype surrounding the first has been spreading like wildfire.

There are many great cards in this first set, one of which is the Midnight (Top 8) which features the Hero Midnight in all her glory. The card is one of the most in-demand cards at the moment, so let’s take a look at what makes this card so valuable! 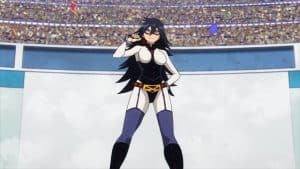 Midnight is one of the strongest Pro heroes in Japan. Also, she is a teacher at the prestigious UA high who trains the next generation of heroes to come! Midnight teaches Modern Hero Art History at UA and some other subjects.

Her power releases an aroma that puts people to sleep; this aroma works best on males!

Midnight’s real name is Nemuri, and she was supposed to be the homeroom teacher for class 1-A at UA high school.

The card features midnight in a signature pose of hers. People who’ve seen the anime know what Nemuri’s personality is like. She has a very seductive tone in her voice, and the males just flock to her.

Her quirk might be the reason for this phenomenon, but her looks also help her out.

The purple color behind her represents her quirk which is an aroma, which often is purplish-pink in color!

As of writing this blog post for the lovely Midnight (Top 8), it is being sold for a whopping $450 on tcgplayer.com! This amount was unheard of in the My Hero Academia card collecting circles. Still, apparently, the hype surrounding this set has gone to such levels that people are willing to pay $400 to get Midnight’s card!

This is the first set in the My Hero Academia card game; this card might only increase in value as years go by!