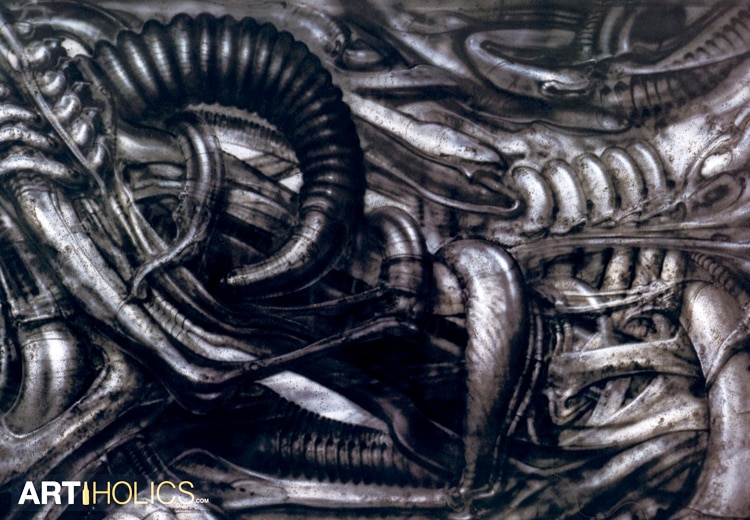 Legendary surrealist painter who’s Oscar winning special effects defined the look of Ridley Scott’s Alien, H.R. Giger, died today at the age of 74 in a Zurich hospital in Switzerland, resulting from injuries he sustained in a fall.  If you’ve never had a chance to delve into his amazingly dark techno-organic work outside of the Alien / Poltergeist / Species film franchises or Dark Seed video games, he is one of our 10 Surrealists every art lover should know – and I highly encourage you to do a little googling.

I remember in the 90s the New York club The Limelight, which was a nightclub built inside what was once an old church, commissioned Giger to create a VIP H.R. Giger Room.  I had been to the Limelight a few times during it’s heyday and unfortunately never got access to the room.  The Limelight is now a mall.  According to io9 there are still a few Giger bars in existence.

His sculptures, drawings, and paintings are all insane marvels of technological futuristic wizardry, combined with living matter, muscles, tendons, vaginas, cocks, bones, exoskeletons.  If you aren’t into aliens fucking but you do want to add H.R. Giger to your art book library you may prefer his hyper-future architectural vision of New York he created in a book chock full of insanely intricate cityscapes, 1982’s  H.R. Giger N.Y. City (long out of print, good luck finding it).  For anyone else who isn’t intimidated by a little hi-tech eroticism, here is a full list of his books of his collected works.