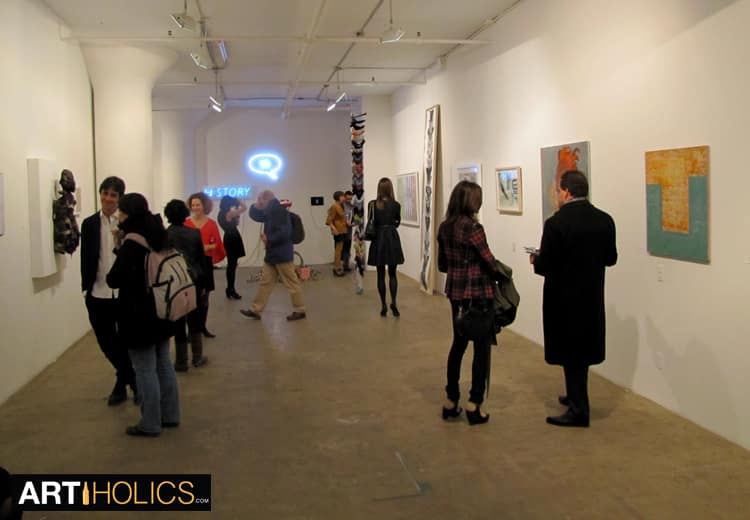 It is always a crapshoot when a new satellite art fair decides to join the Armory Arts Week fray. The already saturated lineup of round robin fair hopping is somewhat a well oiled machine, throwing a new wrench into the mix will either make the machine run smoother, or can jam up the works and die on the vine.  Some will to mutate to another month, or even focus on another city to survive (see Bridge, Red Dot, Verge, PooL, Pulse, Korean Art Fair, Dutch Art Now).

I always am one to root for the underdog and when the new upstart Clio Art Fair contacted us about being a media sponsor I figured why not at least check it out and throw our Artiholics logo and some press their way for support. Touted as The Anti-Fair for Independent Artists (aka without permanent NYC gallery representation) it seemed to be just that.

Located in Chelsea at The Highline Loft, 508 West 26th street and 10th Ave, if you didn’t know it was happening as there is no outdoor signage, you might walk right by.

The signage is in the lobby and is oddly missing it’s media sponsorship logos. Elevator up to the fifth floor and you will arrive at the venue. Two large rooms separated by a median wall.

I got some wine and cheese and set out to meet some of the artists.

Guang Zhu with her work, a steel set of mathematical floating cubes.

Pop Dogs, the mobile art installation to discuss the global issue of dog over-population by exploring the global cycle of craving, consumption and abandonment.

Alessandro Berni, the US Editor of Artribune.

Artist Verdiana Patacchini in front of a drawing she made with acid and aluminum.

I’ve noticed a pattern trend of seeing neon signs that flash and then have an alternate meaning –  this sort of thing is big at The Armory Show.

The insane thing about this piece is that when you look at it with the naked eye it looks like an abstract pattern of triangles, but if you see it through the viewfinder of a camera or back up several dozen feet the image instantly comes together as a tiger.

This is a puffer fish in a cage, also by Jamie, but really hard to photograph.

Artwork by the late artist Luoratoll, presented by Michela Bondardo pictured above.

Photo of myself by Alessandra Guidetti.

This is an eclectic mix of artists of all disciplines. Sculptors, painters, photographers. I was glad I was there for the VIP opening reception and was able to meet some of the artists.  The reception was priced at $90 a head, which is a little steep for an unproven entity, especially when the extremely popular Unfair was having their opening reception 30 blocks away for free, with free wine, popcorn, and Ben & Jerry’s ice cream served to you by THE ACTUAL Ben & Jerry.

Photo of me by Jamie Martinez.

Jamie Martinez was off to meet up with some of his writers at The Unfair, which happens to be the other upstart Anti-Fair Fair Artiholics is a media sponsor of so when he left I grabbed my coat and went along for the ride.

If you are in Chelsea this week checking out the Chelsea Fairs: The Moving Image, The Independent, The New City Art Fair, The first ever Highline Open Studios, be sure to swing by and check it out Clio, and tell em Artiholics sent you.