Art of One Piece: Yamato Secret Rare from One Piece Romance Dawn

Yamato Secret Rare is a part of One Piece Romance Dawn.

One Piece is undoubtedly one of the best anime of all time, not just because of how good the story is but also because of how well the creators have managed to keep the quality of the show consistent even after two decades since it first started.

In 2022, One Piece is celebrating its 25th anniversary, and it’s an anime that hit this milestone while the main story is still airing and shows no signs of slowing down anytime soon. So to celebrate this feat, a Card Game based on the anime was released.

The first-ever expansion/set for the CCG is called Romance Dawn, which was also the name of the arc that aired when One Piece started. The collection features some stunning cards, one of which is the Yamato Secret Rare, which features the popular Yamato, son of Kaidou.

It has been getting a lot of traction since its release, and we’re here to uncover why this is happening by deep diving into the origins of the cards and also sharing some fun trivia about it, the value of the card, and, most importantly, the illustration. 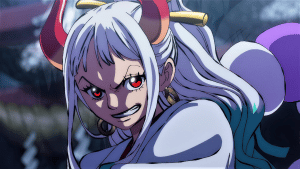 As you can see, Yamato is a female, but he likes to go by the name Yamato, a male name, and also wants to be referred to as a male in the world of One Piece. This desire to be referred to as man stems from Yamato’s thirst to become an Oden, a title only males can have.

So rather than whining about her life, he did something to change it; he trained hard, changed his name, and became a strong character in the show. He played a significant role in the Wano Country arc and came very close to joining the straw hat pirates.

The card’s main selling point is the illustration it boasts, and oh boy, isn’t it great. Yamato’s character design is already very unique, the only thing the artists of this card had to do was to give Yamato a pose that reflects his personality, and he has done a great job at it.

The best part about this illustration is its simplicity; many love One Piece’s art style because it is simple, and this art style is well reflected in this card. This simple yet powerful illustration deserves all the praise it gets!

As of writing this blog post, the Yamato Secret Rare is being sold anywhere around $20-30, which is not bad considering this is not the best Yamato Card from the set, and the set itself is the first ever CCG set for a brand-new franchise in this space.

Recommended – Art of One Piece: Yamato Parallel from One Piece Romance Dawn