Donquixote Doflamingo Parallel (Leader) is a part of One Piece Romance Dawn.

The One Piece Card Game was released to celebrate the special 25th anniversary of the One Piece anime. It has continued to air and captivate audiences long after much other anime have ended their runs. The card game demonstrates a passion and attention to detail from its creators, who went above and beyond by creating new illustrations for the cards rather than just repurposing artwork from the anime.

The first expansion for the game is called “Romance Dawn,” named after one of the earliest arcs in the show. It features several highly sought-after cards, including the Donquixote Doflamingo Parallel art, which has consistently been one of the most coveted cards in the set. In this article, we will explore the reasons behind the popularity and value of this expansion. 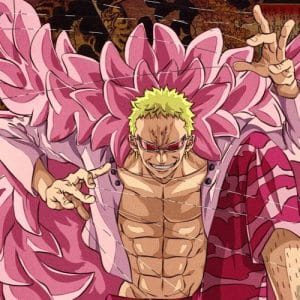 Donquixote Doflamingo, the name sure is a mouthful; I’m glad that people call him by his nickname, which is Yaksha, or Heavenly Yaksha!

He is the captain of the Donquixote Pirates and is one of the seven warlords of the sea. He is really powerful as a bounty of 340,000,000 was set on his head. But it was later on frozen.

Donquixote Doflamingo has such a great name because he comes from a family of nobles.

Donquixote Doflamingo is known to be very striking in the anime, which is well reflected in how he dresses. So when I see a card that has Donquixote on it, shouting like he is, I don’t feel surprised at all. This is how many anime fans envision Donquixote to be. So the artist has nailed the character’s traits.

As for the illustration itself, it looks good. The art style the artists went for is pretty much perfect for Doflamingo.

As of writing this blog post, the Donquixote Doflamingo Parallel (Leader) is sold for around $80-90!

Now that’s a significant number, especially considering that Donquixote Doflamingo isn’t the most popular character. He is popular, but having his card go for so much is a testament to the fact that the illustrator has done a great job creating the card’s artwork.

The future of the card also looks bright as this is the best Donquixote Doflamingo card from the set by a mile!

Recommended – Art of One Piece: Boa Hancock Parallel from One Piece Romance Dawn