Donquixote Doflamingo Parallel is a part of One Piece Romance Dawn.

Released just a few days ago, the One Piece Card Game has managed to pivot from an obscure new TCG to a full-fledged, fan-favorite one. The transition is something that many saw coming; I mean, this is One Piece; after all, if any anime-inspired CCG is going to make it, it will be One Piece!

And the CCG also came out on a crucial point in One Piece history; this year marks the 25th anniversary of this fantastic anime, so the creators went all in when developing this card game. It features an excellent gameplay loop and illustrations that will leave any One Piece fan wanting more!

One such illustration can be found in the Donquixote Doflamingo Parallel art, which has been doing great numbers since its release. The card is in demand now, and we’re here to decipher why! 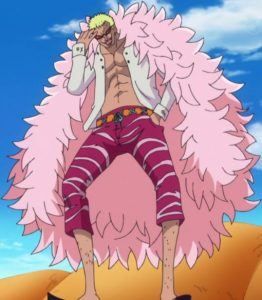 But there’s a good reason his name is as such; he was born in a family of nobles, you know, people who have long names that are hard to pronounce.

Donquixote Doflamingo is as dazzling as they get; the man can be seen sporting his insanely bright pink fur coat and weird eye-shaped goggles everywhere. And somehow, he managed to appear 5-times in this first expansion!

As for the illustration, it is driving the price of Donquixote Doflamingo Parallel higher. The art style chosen by the artist is something we’re not very used to as One Piece is an anime, and this is more like a painting.

But we’re not comparing because it brings a dark-grimy look to the character, which many anime fans like.

As of writing this blog post, the value of this card has been floating around $50 across reseller sites like eBay and TCGPlayer. But this doesn’t mean you can buy it for $50 or sell it for the same amount. The condition matters a lot. You might get even higher if you have a better condition Donquixote Doflamingo Parallel.