Vera Kachouh’s The Moon in My Kitchen – The Baking Artist 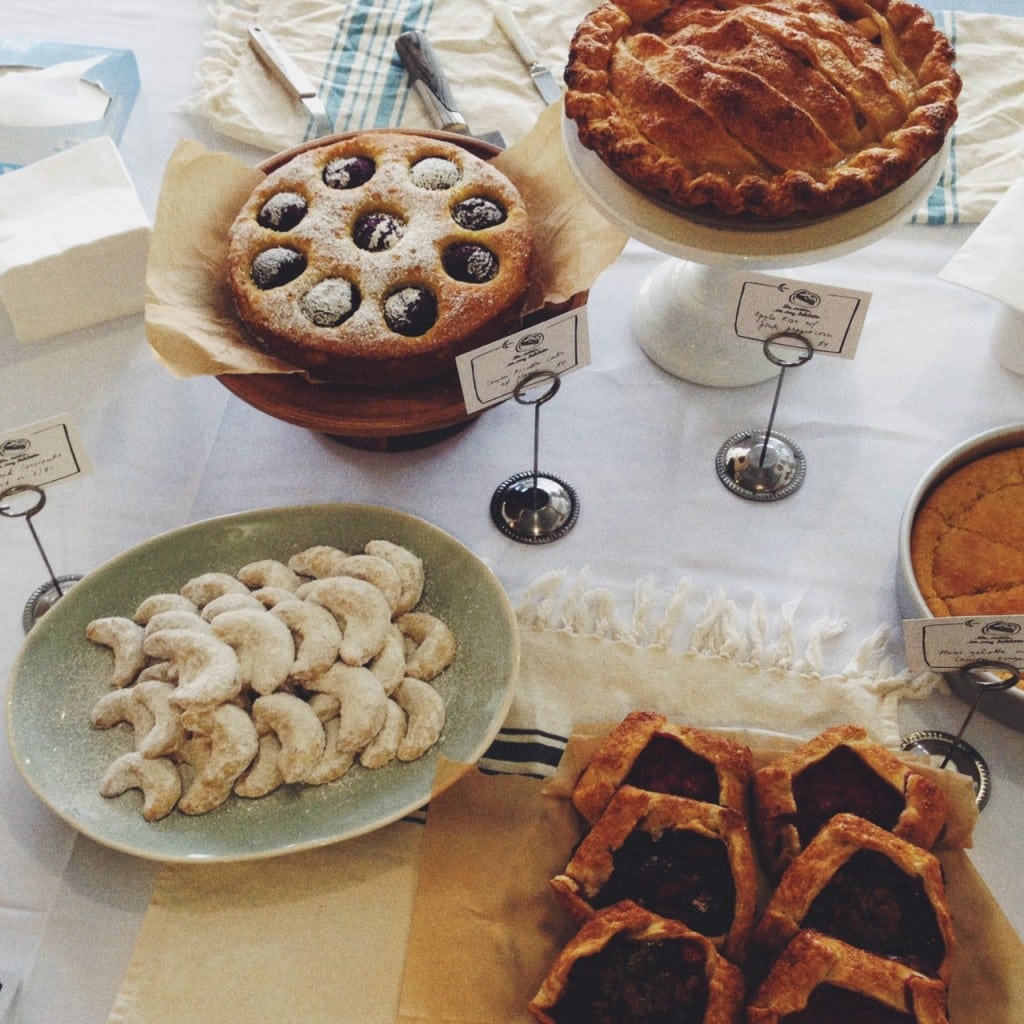 During Open Studios at the Noonan Building, I experienced a unique element that you wouldn’t easily find at any studio event – Vera Kachouh’s pastry Pop-Up known as The Moon in My Kitchen. That is also the title of this Oakland-based artist’s food blog, which I’ve been exploring throughout this year. After hearing that The Moon in My Kitchen would make an appearance during Open Studios, I became excited, not knowing exactly what to expect. What might a food blog look like when taken offline and made available in person?

In one of the art studios that Saturday afternoon, Kachouh set up a table of creative baked sweets. She warmly offered me custard-filled cornbread (with a healthy drizzle of maple syrup), almond crescent cookies, palm-sized fruit galettes, ricotta plum cake, and a rare take on pie (apple with a touch of rose and pink peppercorn). I choose the peppery pie and savored it while walking through a few studios.

Having that bite of pie while looking at art left a pleasing imprint in my memory. I’ve complained about this before—when collecting blog pictures, I forget to really stop and look around without the eye of my camera. With a 4-inch tall slice of pie, I at least had to put down all mobile devices in order to hold the dessert. It made me linger near the paintings of Rob Minervini and Alice Raymond, which felt very healthy. Both sets of paintings require a tranquil mode anyway when experiencing the pieces in person.

As the author of The Moon in My Kitchen blog, Kachouh draws us into her exploration of different recipes, often adapting several combined or edited recipes from other contemporary cooks and bakers. For this baker, food and stories often feel interchangeable. Some posts incorporate food with glimpses of Kachouh’s private life (moving homes, traveling, memories, her honesty about significant loss and heartache).  You may also find the blog’s publicity on Bon Appetite  in one online article on seasonal strawberries in 2012).  Other rich posts contain meditations on art and literature (If you gravitate towards Virginia Woolf, you’ll love her more in Kachouh’s post regarding apple trees).

Going through the blog, one feels accompanied by a voice naturally adept in food writing. We catch Kachouh’s healthy knowledge of cookbooks.  Her research spans multiple interesting and popular cookbooks like Tartine (the SF-based bakery), The Four and Twenty Blackbirds Pie Book, WWII Era’s How to Cook a Woolf, A Homemade Life, and Ripe: a Cook in the Orchard. Julia Child feels so familiar to the author that the blog refers to her by the first name sometimes. They appear to be friends, even without ever being introduced. It hardly matters that Julia Child is no longer with us.

As a writer, Kachouh seems invested in exploring more ways to describe and think about food.  When testing a griddle for pancakes, she tells us that instead of merely looking for sizzling water drops (the common directions on your store-bought pancake boxes), we must watch the drops dance madly over the hot surface. In another instance, see them dance chaotically, and know that it is the right time to pour batter.

Her summary on chef/writer David Tanis rolls playfully in our ears: “[Tanis,] the master of simple elegance; master of the unfussy, but remarkable, culinary creation.”

Kachouh’s chosen words for this blog title set an image and a mood in mind, one that you could describe as romantic and mysterious. The Moon in My Kitchen. A window is implied, along with beams of moonlight in whatever shades you can imagine. Of this carefully chosen title, Kachouh said that her baking used to always take place in after hours—early mornings or late nights. The real joy of those hours came from being on the periphery of other daily obligations. She wrote in an email exchange, “I found these twilight or dawn hours to be really beautiful and profound. It was a special secret time that gave me permission to do what I really wanted. “

After completing her MFA with the San Francisco Art Institute, Kachouh began to take her baking seriously. She’s a self-taught baker, whose true start to this craft began when Kachouh was very young. Around the time when she completed graduate school, Kachouh made video installations. In her view, that video work continued to feel more and more intangible, which translated into something unfulfilling. As a reaction, Kachouh found solace in the visceral nature of baking, and then writing. Through the blog platform, she began to chronicle her life, document her “changing culinary moods,” and she began to feed people, an act that makes this artist truly happy. The information on The Moon in My Kitchen certainly feeds others in an indirect and valuable way.

Until coming across Kachouh’s blog, I didn’t think about how much the writing on food affects me. Images of food might remind me that I’m hungry, but writings that involve food stick with me.  Words seem to send me towards very specific actions. Here are few examples:

Sigrid Nunez’s The Last of Her Kind, deliciously describes crab salad over a fresh halve of avocado. This simple dish makes a minute appearance in Nunez’s account of 1960’s era New York, but it sent me towards crab and avocado before I finished the novel. No pictures or illustrations appear in this book. I just could not escape the main character’s memory of this dish. Side note: this piece of fiction is an especially good book to read right now, amongst all the protests and discussions on race, on the nature of our justice system.

Recently, I embarked on a long walk for good doughnuts, an unusual journey for me, as doughnuts previously have never had a huge affect. I assumed that they can be found on any street corner… KQED’s take on the 5 best doughnut places in the East Bay assisted my hunt, but that’s not where this craving began. I traced the sudden doughnut desire to the humorous food component of Michelle Kicherer’s short story, “The Loneliest Gynecologist.” Her main character guiltily eats dozens of doughnuts alone in a car, as a way to beat the stresses of being a doctor. Dr. Oswald also lies about her large orders, telling the baker who knows her by name, “They’re for the office…” I ended up at Doughnut Dolly in Temescal, ordering less than a dozen doughnuts, but like Dr. Oswald, I did contemplate some of the guilt that sugar brings.

During this past summer, after glancing and re-glancing one of Kachouh’s posts, I felt the need to not only consume, but to bake her adapted recipe for rye biscuits with roasted fruit and freshly whipped cream. I had not made time for baking in months, but The Moon in My Kitchen wrote about such appealing flavors and textures in this dish alongside some jovial after effects. She mentioned breezes and memories of store-bought, gooey, yellow-spongy versions of the dessert that could not be forgotten. Bakeries nearby did not carry this dish. Later, no bakery could help me because more than the sweet and nutty flavors, I began to crave the fun of a messy kitchen.

In an email exchange, Kachouh wrote that she plans to expand The Moon in my Kitchen. Currently, growth for her business entails Pop-Ups for special occasions and also orders taken for Thanksgiving and Christmas. Thereafter, Kachouh plans to partake in a series of pop-ups throughout 2015 accompanied by “an exciting spring season with lots of beautiful Bay Area fruits ripening and showing up at the markets.”

In a much larger picture, Kachouh aspires to create a brick and mortar spot for her business. It would be a place where the surrounding community could gather and enjoy fresh pastries with coffee while becoming closer as neighbors. See the end of this post for a more detailed vision and the philosophical twists of Kachouh’s dream restaurant. These are my favorite components of that environment: Honey-water, a record player spouting plucky bluegrass tunes, bowls of yellow cherries and figs on every table in the summertime.  The artist/baker conjured those images and details while she wrote about custard-filled cornbread. That would be the first item on her menu.

I highly recommend reading this blog. You will find familiar and unfamiliar recipes, enjoyable prose, fetching food photography, and a welcoming author.  If you’re on the West Coast, pay attention to Vera Kachouh’s Pop-Up sightings, some of which may include partnerships with artists and craftsmen. On her blog, you will come across more than one way to connect with a generous, imaginative home.

Find more of Kachouh’s photography on her Instagram page.