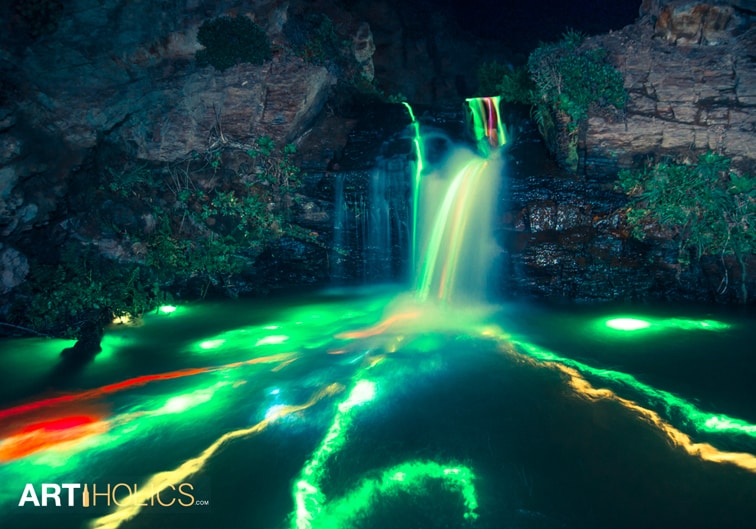 I grew up in New Jersey a few towns over from the original Mars M&M’s factory.  A lot of my friends parent’s worked there, and there was a common story that early on before environmental regulations were so strict the factory would dump excess candy coating waste colors (melt in your mouth not in your ground water) into a local stream.  A different color every day of the week.  The locals could tell what day it was by what color the stream was flowing.

In my Charlie & The Chocolate Factory influenced mind, these photos are what I was imagining.

The San Francisco based photography / multimedia team of Sean Lenz and Kris Abildgaard otherwise known as From The Lenz have taken long exposure photography to a new “otherworldly” place.  This isn’t writing your name or some winding highway at night.

They drop Cyalume glow sticks into waterfalls and streams.  They shoot them with fixed cameras set to long exposure times (30 seconds up to 7 minutes).  After they collect the glow sticks, they check out their results.  And the results are nothing shy of amazing.

A series like this has never been done before.  After only 20 hours of launching the photos on their website they have gained 13.6 million views.

You can view more photos from their “Neon Luminance” series on their website by clicking here.

Editor’s Note: For any geography nerds out there, I just used Pacific Heights in the title for the alliteration, I have no idea where in Northern California or elsewhere these were actually photographed.