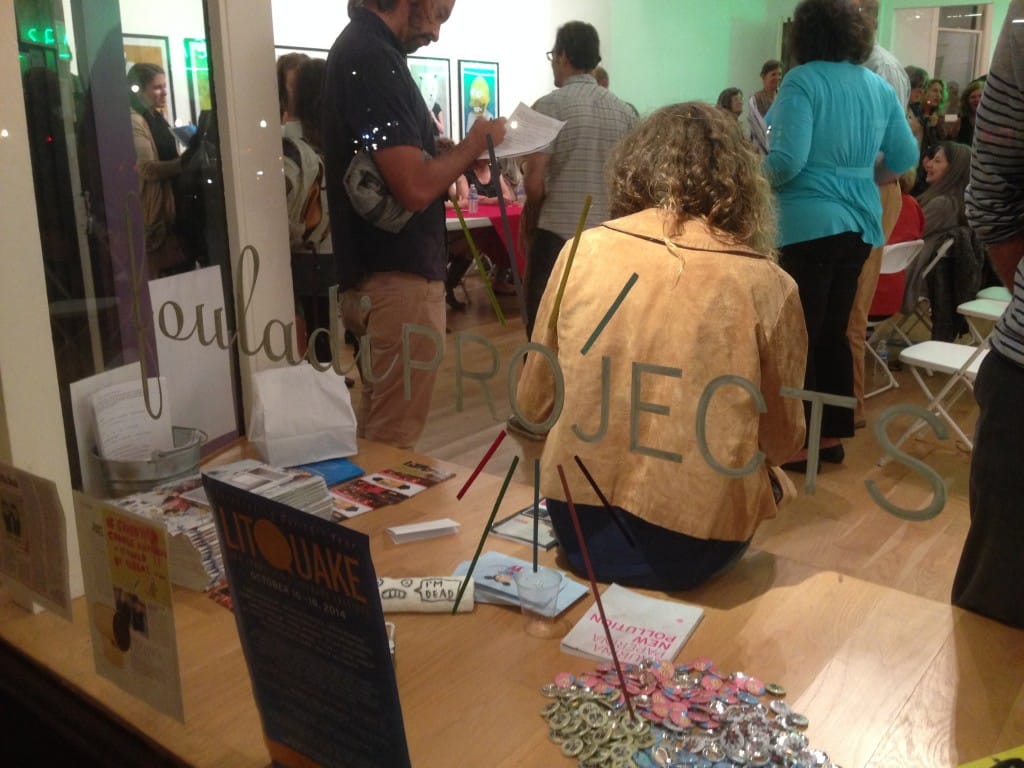 Many cultural events actually coincide with the season of open studios in San Francisco. ARTober Fest encompasses more than visual Art.  It also surpasses the month of October and fills in the beginning of  November. If you plan to visit the Bay Area, you’ll get your money’ worth if you come here between October and November.  At the start of the month, the free, gigantic blue grass festival known as Strictly Hardly takes over the first weekend.  A few studio groups begin showing work the second week.  Then comes Litquake, the 15-year-old literary festival that swoops into the Bay Area for a busy week.  It’s an amazing representation of the Bay Area.

During both weekdays and the weekend, people vie for seats (or space to stand) at readings, panel discussions, and writing workshops. The infamous “Lit Crawl” celebrates the end of the festival. This year the crawl included 101 events taking place in three hours. Over 900 authors brought their work to the public in just a week. Many writers come from the West Coast while others are international. While the festival takes place mostly in San Francisco, events stretch out in every direction: the North Bay, Berkeley, Oakland, and the South Bay all become bustling grounds for Litquake authors to share their work.

Encounters with the visual world definitely happen during this literary occasion. A few examples from 2014 included a roundtable discussion of contemporary book design; an exhibit of cover art from Bay Area publishers; artists and illustrators from the The New Yorker in conversation with the West Coast; and a talk on the art of Italian children’s books.

At the panel discussion, “Being with Death: The Art of Dying in the Modern Age,” Fouladi Projects Gallery, 13-Oct-2014

My start of Litquake involved a somber but simultaneously uplifting panel discussion called “Being with Death: The Art of Dying in the Modern Age.” Four Bay Area writers, who have published memoirs and non-fiction surrounding death within today’s medical practices, spoke to an audience that quickly grew heavy-hearted.

Though we became a sniffling, weepy audience, it felt very good to talk about death. I feel that the people sitting with me felt the same way. Though the scenarios described caused many of us to tear up (Panelist Monica Wesolowska spoke about the one month lifespan of an infant she lost after childbirth; Elizabeth Scarboro talked about the passing of her first young husband from Cystic Fibrosis in his mere mid-twenties) the speakers created such strong models of understanding and acceptance that you just couldn’t walk away from the talk in pain. Panelist Katy Butler framed it this way, “You can’t have a good death without talking about it.”

Butler and Sheila Himmel lead the talk towards a wider perspective on how people die today (i.e. regarding the number of us who experience ICU before dying, the involvement of medical professionals, and the definition of a natural death). Skillfully, all four writers spoke on the pain from a prolonged deathbed, which affected each of them in the past. Though the audience cried, the panelists did not.

Photo of the audience and panelist, Elizabeth Scarboro, Litquake 2014

This public talk surfaced just 2 weeks before Brittany Maynard’s public and controversial decision to seek Oregon’s Death with Dignity Law. With stage 4 brain cancer, Maynard chose to end her life with the help of doctors on November 1, 2014. The wide publicity of Maynard’s difficult situation likely attracted some audience members to this talk.

One of the most heartening moments came, when Butler asked where the med students sat in the audience. A few men and women raised their hands, and we all gave applause. These were nurses, hospice workers, therapists, and doctors taking an extra step to better understand patients’ dying with dignity.

The above photo came from “The Art of Poetry” panel discussion (one of the recurring talks for every Litquake). This year, panelists included published authors Robin Ekiss, Elizabeth Block, Roxanne Beth Johnson, Zack Rogow, and Judy Halebsky.

6: 20 PM, twenty minutes late for the first phase of Lit Crawl and I find myself at the back of the audience, which pushed all the way out the front door, sadly out of hearing range. This is the closest I got to hearing about contemporary science fiction at a store in the Mission District called the Time Frame. It’s a slightly unusual place to hold such a public gathering (among glass cases full of eyewear and a space fit for a handful of customers rather than this lit crowd), but that’s the charm of Litquake.  It’s a festival that creatively calls in all parts of the community to share culture. Speakers included Michael Blumlein, Ellen Klages, Tim Pratt, Jacob Weismam, and Tad Williams.

Another view of the crowd from outside of “Science Fiction in the 21st Century,”2014 Lit Crawl.

Phase II of Lit Crawl 2014, in the store of an independent designer called Five and Diamond in the Mission, “Funcheap Presents San Francisco on $0 a Day”

7:15 PM: A fun discussion between five San Francisco savvy writers on the most creative ways to live cheaply in this expensive city.  Featuring Eve Batey, Johnny Funcheap, Brandon R. Reynolds, Stuart Schuffman, and Beth Spotswood. Note the far-left panelist who joined in digitally. Readers, please be reminded that while this Phase II event took place between 7:15 and 8:15 PM, about thirty other Phase II events also happened.

Phase III of the Lit Crawl, “Librarian Authors in the Stacks,” at Press: Works on Paper.

Around 8:40 PM, I and a partner walked into a rare book bookstore called Press: Works on Paper. A poetry reading made the perfect end to the evening. This one featured librarian authors from all over the Bay and beyond: Andrew Demcak, Tayrn Edwards, Moazzam Sheikh, Erin Wilson, and Michelle Zaffino.

Near the end of Phase III, Photo of Press: Works on Paper

A view inside ofPress: Works on Paper and some crowd members standing all around the store, Photo courtesy of Michelle Kicherer.

Lit-quake, a suitable name for a festival in the Bay Area. Though we’re never sure when we’ll suffer the next big earthquake, we can be sure that this literary giant comes back to town each Fall. I have a feeling that upcoming years will continue to feel endlessly loaded with pointed ideas, great people, images, poetry, and too much to talk about.