Art of One Piece: Trafalgar Law Parallel Leader from One Piece Romance Dawn

Trafalgar Law Parallel is a part of One Piece Romance Dawn.

The One Piece Card game was released just a few weeks ago and has garnered much attention since. The first official expansion is called ‘Romance Dawn’; this should ring a bell in many long-time fans’ heads as it was the name of one of the first few arcs of the show.

The Romance Dawn Expansion is a testament to the creators of One Piece, who wanted to celebrate their 25th anniversary in style. They left no stone unturned when creating new illustrations for the cards and giving them an exciting gameplay loop.

The CCG for the anime features some phenomenal cards which have been selling for thousands of dollars across reseller marketplaces! One such card is the Trafalgar Law Parallel art, which features, as you guessed it, Trafalgar Law.

The card has been blowing up as of writing this blog post, and we’re here to decipher why. By the end of the article, you’ll have a good understanding of the card and why it carries the value it has so that you make an informed purchase! 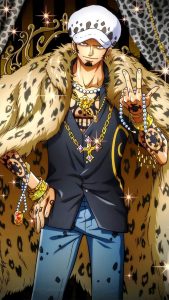 Trafalgar D. Water Law, or just Trafalgar Law, is the Captain of the heart pirates! He hails from the North Bue sea and has been dubbed the  ‘Surgeon of death’ by many in the pirating world for his antics!

He is also one of the pirates, called the ‘worst generation,’ and later on allies with the show’s protagonist, Luffy, and his crew, the Straw Hat Pirates!

Trafalgar Law Parallel isn’t the only Trafalgar Law card you’ll find in the expansion; many are created, as you can see above. This is because of Trafalgar Law’s immense popularity within the One Piece community. The appeal for this character is high, hence the love he got in the first expansion.

As for the illustration of the card, the Trafalgar Law Parallel sure falls short when compared to some other cards on this set. This one doesn’t look anything extraordinary when you take a look at other parallel arts.

Regardless, it is a dual color card, i.e., it can have both Red and Green cards in its deck, which is a massive boost to any player as you have a broader card list to pull from.

Trafalgar Law looks badass in the picture. This reflects his personality well, which is something fans love!

As of writing this blog post, the Trafalgar Law Parallel is being sold for a whopping $100 across card reseller sites. Now, remember that this value might fluctuate based on your region and the condition of the cards.

As for the future of this card, it looks bright. The character is pretty popular, and this is parallel art, so it is also rare. But don’t expect its value to skyrocket because there’s yet another Trafalgar Law card in the set which looks better than this. However, it is not as expensive as this one as of now.

Recommended – Art of One Piece: Boa Hancock Parallel from One Piece Romance Dawn