A New Eco-Friendly “Grass Station” Sprouts Up In Chelsea 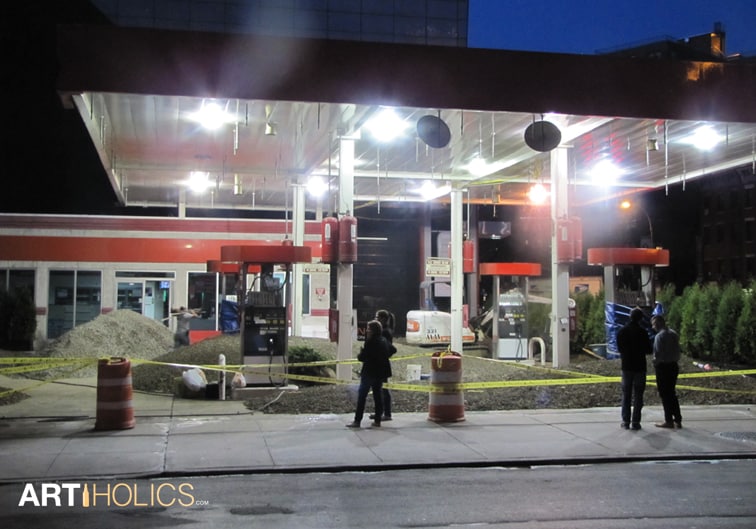 On my way to the opening of Greg Haberny’s Burn All Crayons last week (photo taken September 6th) I noticed the Getty gas station on the corner of 10th Ave and 24th Street was under construction in a bizarre way, with piles of dirt arranged like hills.  I thought it odd that gallery goers were looking at it like it was art.  I thought to myself
“Hey, even construction could be viewed as art in the right context, it is in the right location.”  Luckily I took a picture.

Considering it was right in the gallery section of Chelsea my thought was to make a post poking fun at that concept.  Turns out the joke was on me.

When drunkenly stumbling home from  the W Magazine’s fashion week afterparty on Wednesday (technically EARLY Thursday morning) I happened to be on the same block and a white picket fence as well as a lush grass had been installed where before was just a few piles of dirt and police tape.

Gas, Grass, or Ass.  This place has everything but the ass.

Oh wait, there he is, they actually have a guard sitting on a folding chair all night making sure nobody…fucks on the sod?  I am not quite sure why he’s there.  Midnight picnic prevention?

I did a quick search on this and according to Blouin Artinfo it turns out that real estate developer Michael Shvo bought the defunct station and is going to build a high end luxury residence on the spot which will have an amazing view of the 24 hour car wash.

But this “piece” isn’t fully complete, spoiler alert…there will be sheep

“There will be sheep meandering around the grass. Not real sheep, of course, but sculptures by the late Francois-Xavier Lalanne. “Sheep Station,” a public program which officially opens on September 17, will feature 25 of Lalanne’s Moutons and will be the largest flock ever shown together en plein air… During the construction, the Getty station will feature a series of exhibitions, and the finished residency promises the same.”  – Rozalia Jovanovich – Blouin Artinfo

So there is that to look forward to, yes, sheep.  You’re welcome.  Little Bo Peep not included.  I wonder how long that dude will have to sit on that folding chair.  He may be in it for the long haul.  The Shepard of fake sheep and a couple of man made mole hills.