Juno Actress Ellen Page Is Gay, And She Hates My Guts 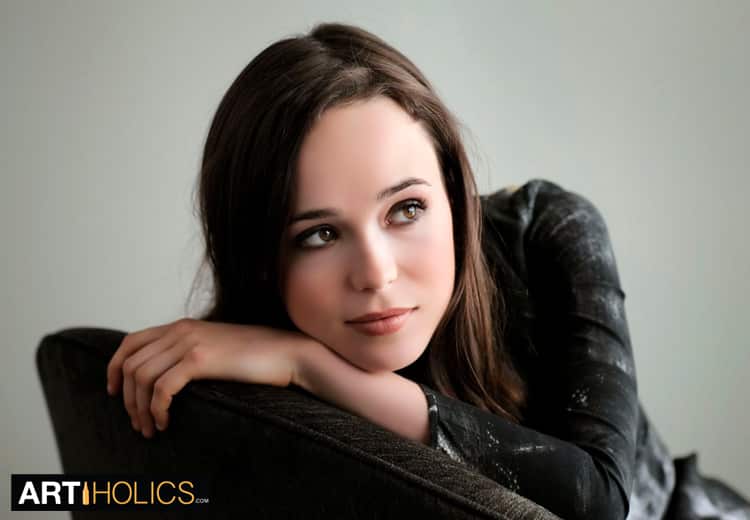 This just makes her even cooler, and is huge for the LGBTQ community.

I have personally never met Ellen Page.  She is a good actress, (Trailer Park Boys, Juno, That one with the dream within a dream and a spinning top).

If you really like her, you can actually BE HER if you have a playstation or xbox  in BEYOND Two Souls, and by “be her,” I mean help her take a shower.

Ok, this might be a little over dramatic.  For anyone who is an oldschooler and followed me on this site’s parent blog ArtSucks.com back in 2010, you might remember an article I wrote titled:

ArtSucks had the unique distinction at the time of being the only art blog that was in TMZ.com‘s blogroll, which was in the sidebar of every page on their site. That being the case I did try to have some celebrity art content at the time to appease the massive TMZ traffic I was getting.  This lasted for a few years until I tightened my focus far more on fine art and less on pop culture.  They got a TV show, grew to enormous proportions, and abandoned having a blogroll.

As I’ve mentioned before (as well as in the article I’m about to repost for you), one of the beautiful (and sort of fucked up) things I learned during that time about the internet and having a popular blog is that if you mention an artist or celebrity, you will likely be contacted by that celebrity within a few weeks.   Ellen is no different.

I had to go though the currently offline archives of ArtSucks.com on my computer that haven’t been reformatted to WordPresss (which is 95% of the site right now) to find this strange little gem, so I’ll republish it here on Artiholics, because of it’s weirdness. Now enjoy this odd bit of unintentional Trolling, from an article originally published on ArtSucks.com on October 11, 2010. <<<

I noticed that this 350.ORG video (seen above) was posted on my friend, environmental stand-up comedian Jackie Eco’s, facebook fan wall and I had to make a few observations on the video. Here is what I posted in the comments:

“One minute 17 seconds of monologue with 36 seconds of actual on screen time and she can’t do it without reading a prompter just to the right of the camera? Jesus, we can see your eyes tracking text, at least memorize the parts where you are on camera, it’s 36 seconds! Act like you care Juno! The only time I can take this chick seriously is when she’s speaking in hipster jive pop culture cliche’s into a plastic land line thats shaped like a hamburger.”  -Cojo, ArtSucks.com

I reposted this on my FB wall because I thought, hey, it’s a funny crit, and it will also get people to watch the video.So the next day I get this pissed off personal facebook message from Ellen Page, whom I’ve never met mind you.

“yes you know me. thus you know whether i truly care or not. please tell me what you are doing for the environment…tell me what steps you have made.” – Ellen Page

I totally love this, because it’s the bitchy “THUNDERCATS ARE GO!” attitude I dig from her onscreen persona, rather than the scripted 350.org speech. Not that “Thundercats Are Go” isn’t scripted, it’s just that I can picture her delivering it better.

To which I responded:

“Ellen,
I know you sincerely care about the environment. This I don’t doubt in the least, your activism is commendable and I would love to point my friends in a direction where they can donate money to your efforts.

My point was just an observation based on your previous acting work, and was not poking fun at you as a person. My point was that your vlog post video thing seemed very scripted and almost like it was your first read through.

Since it was supposed to be a message coming from your heart about one of your own personal passions to encourage your fans to believe and join you in your passion, you might have given it a few more takes, that’s all, just to make it look a little more from the heart. Like I said in the Face book post, committing the on camera parts to memory would have helped. I’m not asking anything less of what Cisco might have asked for a 30 second spot.

It reminded me of those local car commercials you see on basic cable where the dealership owner doesn’t have the budget to hire an actor, but also can’t memorize thirty seconds of canned monologue so he decides to film his own spot with a cue card to the side of the camera as in: ‘I’m John Muller, from Muller Toyota here in Hackensack New Jersey, and here at Muller Toyota of Hackensack our customers must be saying ‘John Muller, you are insane’. . .why you ask?” Like that…

P.S.
Off topic side note, I use Juno as a verb, as in ‘if you aren’t going to eat it, Juno me that sandwich!’

P.S.S.
My mom has only one CD in her car, the Juno soundtrack. Which can get annoying on long car trips, but is a fact none the less.”

That’s the last I heard from her. I’m sure this blog posting will get back to her and I’ll be getting contacted from her, or possibly Diablo Cody. It’s very odd having a blog, whenever I mention a celebrity or an artist they usually end up contacting me like a week or so later, so this one day later thing was pretty shocking (word travels faster on Facebook).

Oh and I remembered after I sent that response back to her that I had actually posted something to the effect of the P.S. on one of my college professor’s blog posts about the movie Juno a few years ago (see Gossip Central – Celebrating Juno)

You may have missed 10-10-10 but it’s not too late to save the planet. Our environment isn’t gonna fix itself on it’s own. If you have an green event you want to announce to the world. I encourage all of you to take my buddy Ellen’s lead, go to 350.ORG and see what you can do next! >>>