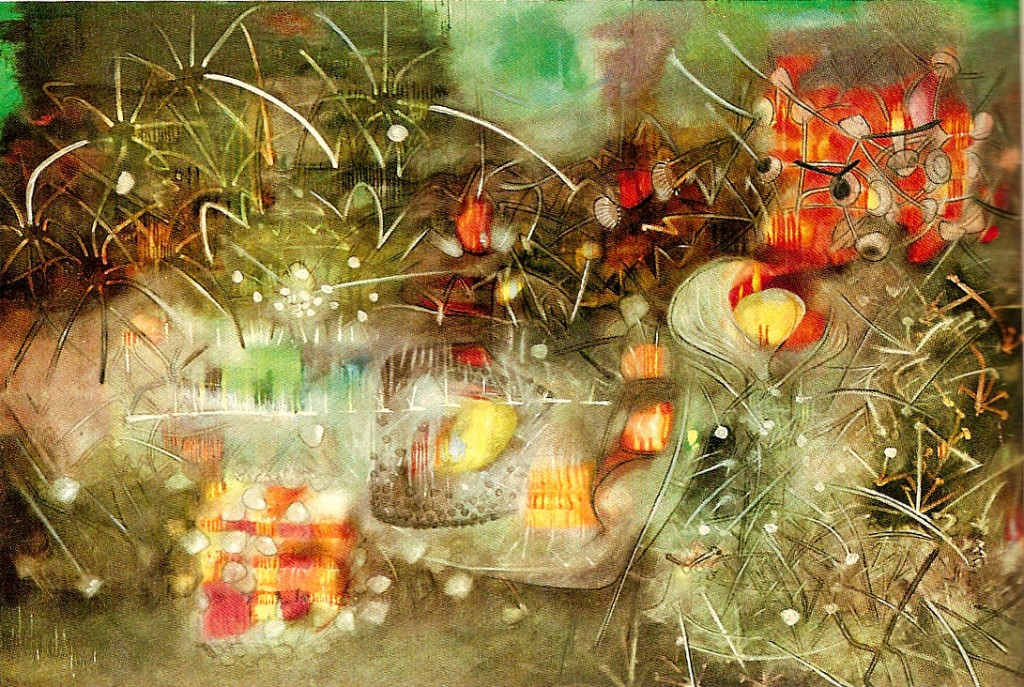 Roberto Matta is a twentieth century surrealist and abstract expressionist. His work seems to contain recognizable forms such as fireworks and onion heads, and possibly even staircases and architectural forms. At closer examination, the viewer realizes his work is composed of unrecognizable features such as lines, complimentary colors, a trail of mossy greens, and the occasional inclusion of yellow. 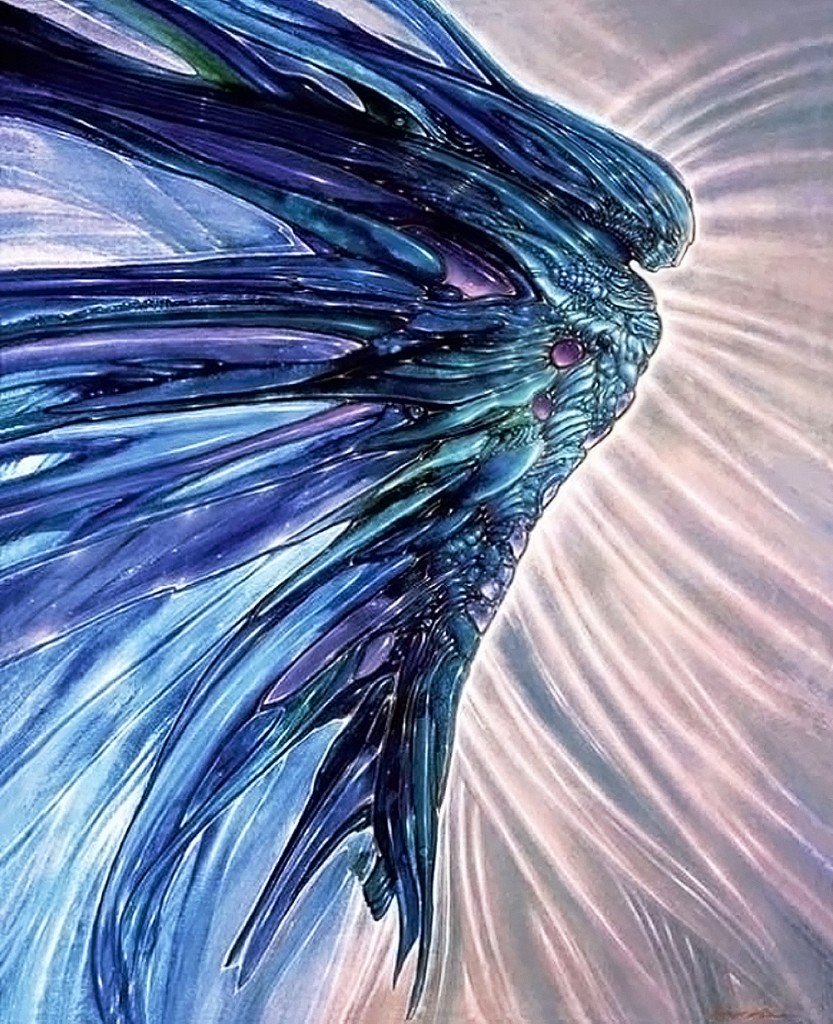 Robert Venosa is an artist that I was first introduced to by seeing a Facebook post of Alex Grey, mentioning his death in 2011. His work caught my eye with its liquidity, and vibrant blues. It’s almost as if he is channeling  extraterrestrial beings that contain benevolence, housed in a shiny membrane with light piercing through its translucence. Venosa’s work gives a new aesthetic to angels, and his work encourages viewers to be transported to another world. 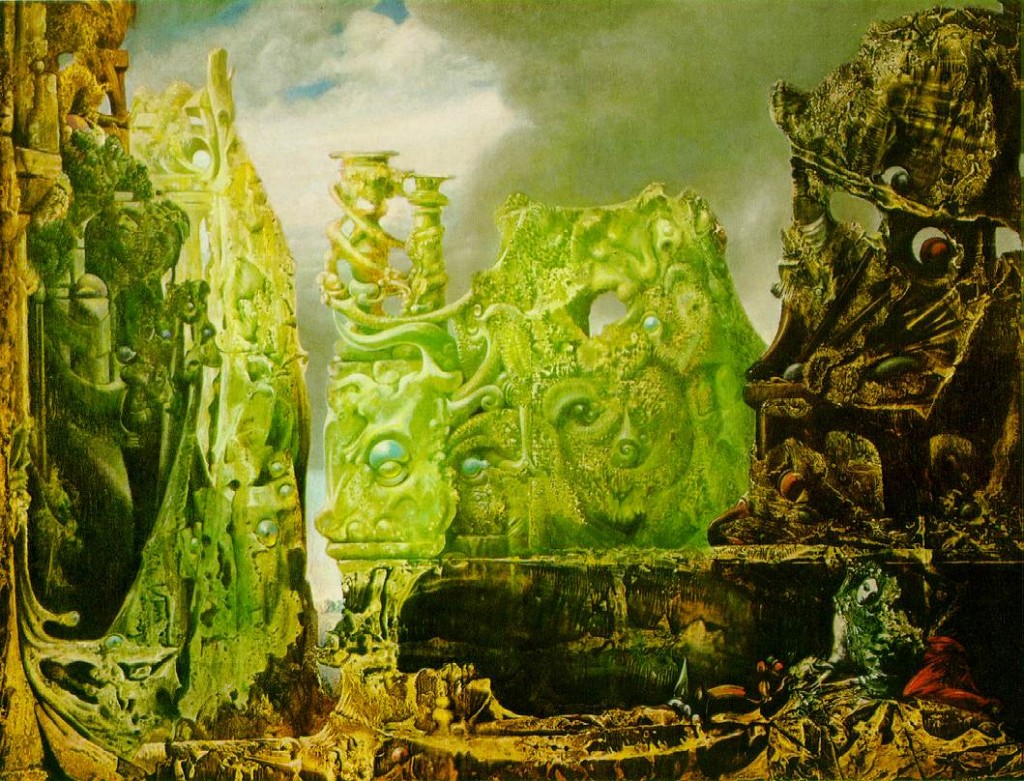 Max Ernst is a surrealist artist that made friends with major players in the art world such as Peggy Guggenheim and Andre Breton in the early twentieth century. Ernst has the ability to create magnificent landscapes that remind us of something from dreams, but not quite nightmares. He conveys organic matter covering seemingly vast surfaces. Ernst uses vibrant colors such as algae green, and a sandy yellow, creating the illusion of real vegetation on some alternate alien planet. There’s visibility of bodies and shadows of anatomical sculptural protrusions in his cavernous painted structures. He influenced the surrealist movement greatly, and made an appearance in the Museum of Modern Art in 1936.

Aurel Schmidt is a Brooklyn based artist that I discovered at the Museum of Modern Art a few years ago. Her work consists of extremely detailed conglomerations of cigarette butts, mice, snakes, and other things one could find in the streets and apartments of the city life. Her work is the kind that you can look at, and keep on finding new things. Included in this blog is an especially successful piece, in which tiny, creepy, crawling, insects, maggots, rodents, and birds- all of which which eats away at our deceased body, ironically compose a human form that stands tall and alive. 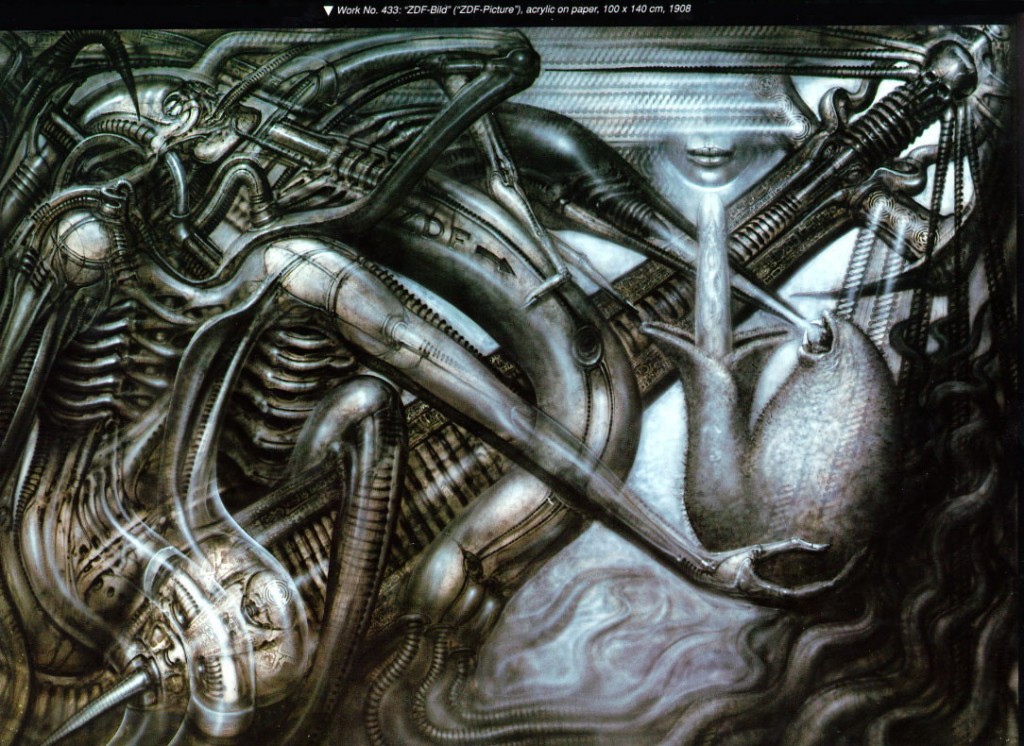 H. R. Giger can be recognized from his set design work of the movie Alien and the Matrix, with his signature “bio-mechanical” style. To any aspiring surrealist, Giger will point you in the direction that helps you bridge the organic with the artificial. He merges the machine with the human anatomy, combining imagery of needles, ridges, chains, phalluses, and flesh to create something visceral and complex. His work feels cold and post-apocolyptic, bringing us into a world that we are both afraid of and intrigued by. 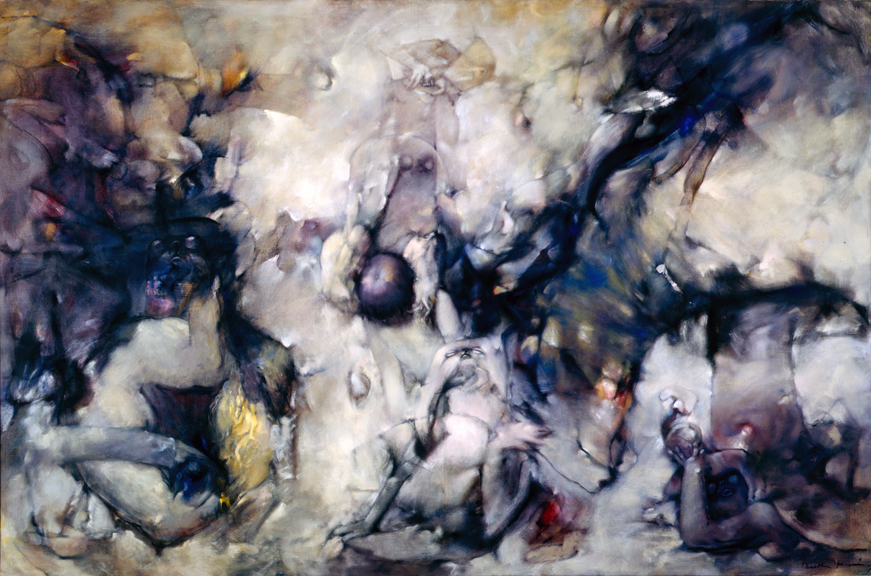 Dorothea Tanning was 101 when she died in 2012, leaving a life and legacy of surrealism behind her. This painting is from the 1960s, and it is that decade, and the late 1950s that her work had an especially ambiguous, ambient, and yet anatomical aesthetic to it. She made extraordinary friends in her lifetime including Robert Motherwell, husband Max Ernst, and Man Ray. Her work is whimsical, and this painting is reminiscent of cumulonimbus clouds one would stare up at during a Summer day dreaming of figures lost in our memory. 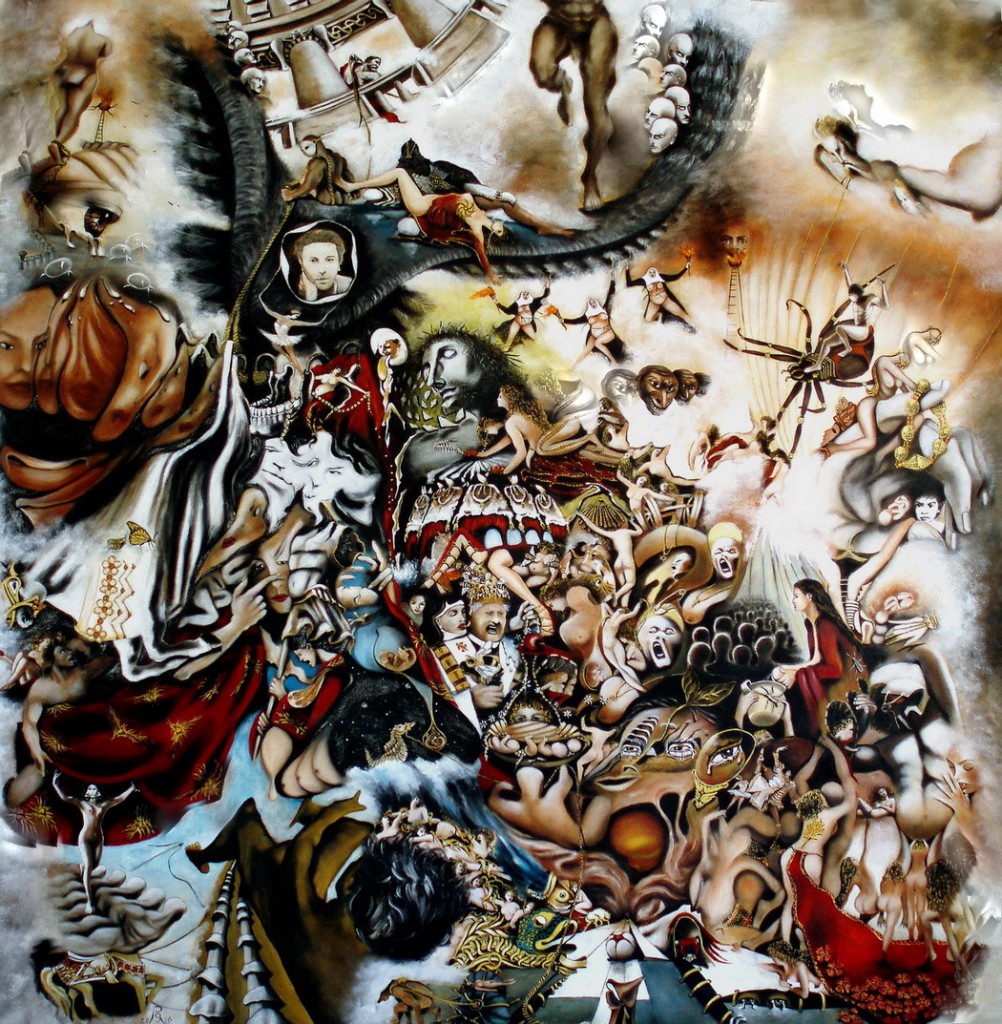 Andre Breton is known as the founder of surrealism because he wrote the surrealism manifesto in 1924. This painting describes the revolution of the mind, as one climbs into their unconscious, there is so much wonder and complexity he or she can discover. 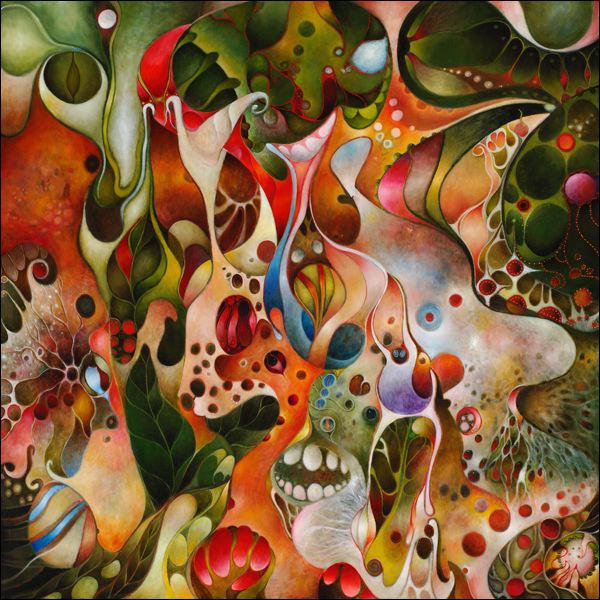 Isaac Abrams founded the first psychedelic art gallery in the world in NYC in the 1960s. I spoke to Isaac on the phone not too long ago, and he told me “God helps those who help themselves. He has shown in the Tate museum twice, and the Whitney Museum twice as well. His work involves intricacies of vibrant patterns, and he has a keen ability to push and pull colors using oil color paint. He is not limited to only paint, as he draws frequently. He is extremely prolific, and he has a major amount of paintings in his studio in upstate NY. He is alive, and still working very hard; if you are interested in one of his painting, you should contact him through his website. 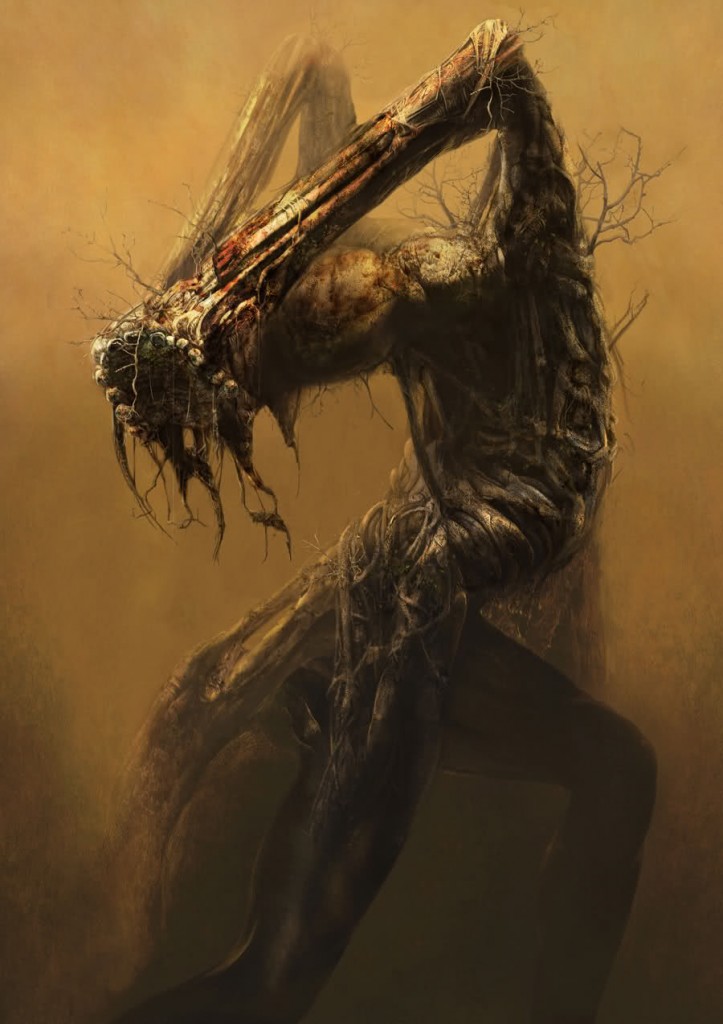 Zdzislaw Beksinski painted haunting oil color paintings that he surprisingly found quite humorous. He was a European painter, and his oeuvre is filled with nightmarish scenes of figures without faces, dream-like landscapes, and creatures from the depths of his mind. Unfortunately, at the end of his life, he was stabbed to death, which marked a series of tragic events towards his final years. Beksinski had the ability to pull us into a surreal plane of existence without never having been academically trained. 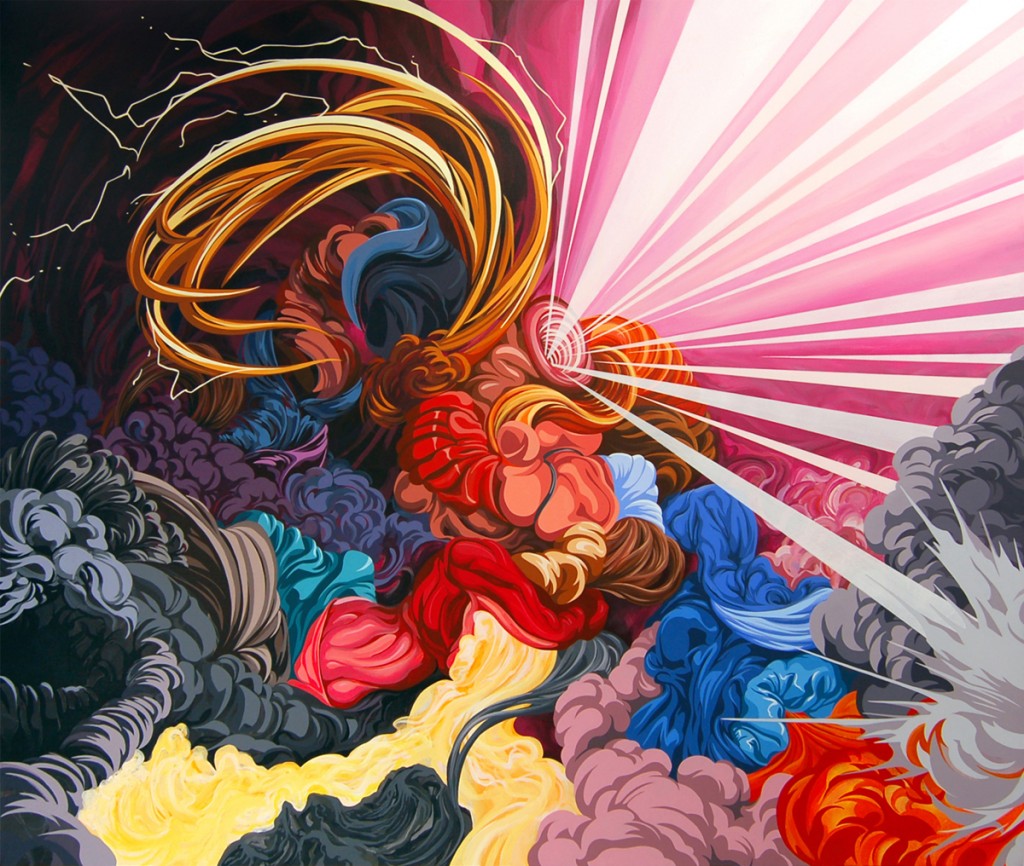 James Roper is an artist that works mostly with acrylic on canvas, although he can work in multiple mediums, including sculpture. His work is explosive, and works brilliantly with tone, as he has gray palettes colliding next vibrant primary colors. His work seems to be the result of Greek Gods throwing thunderbolts at one another in a hurricane of action and propulsion. He has mastered creating folds in fabric by using a limited color palette, not too hasty on gradations. His work employs compositions with centrifugal force.