Celebrity Apprentice Allstars: Behind The Scenes Of The Season Finale 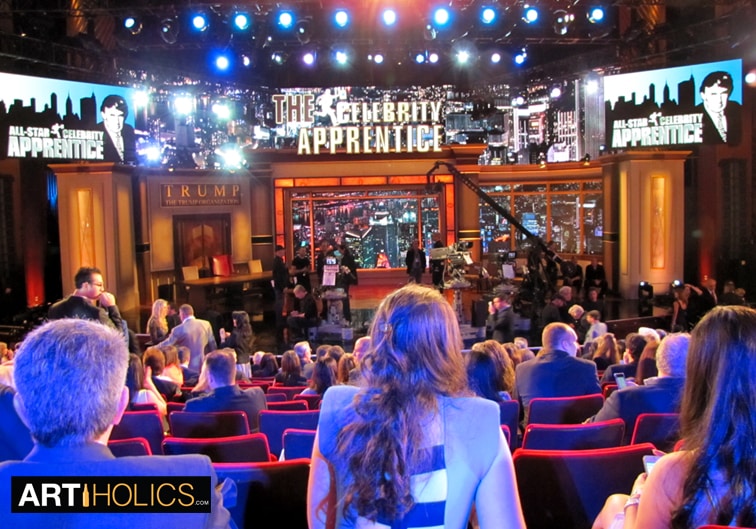 One of the cooler events the Skirball Center For The Performing Arts hosts is the annual season finale of NBC’s The Apprentice.  The show is always packed with celebrities, the Trumps of course, and some of the best dressed millionaires of New York.  Whenever I am not busy and the big show comes to town I try to make it down there to see the taping, meet some of the celebs, and of course attend the after party which (like everything TRUMP) is opulent.  Even though I haven’t seen an episode of the actual show in years, you fall right into the drama. 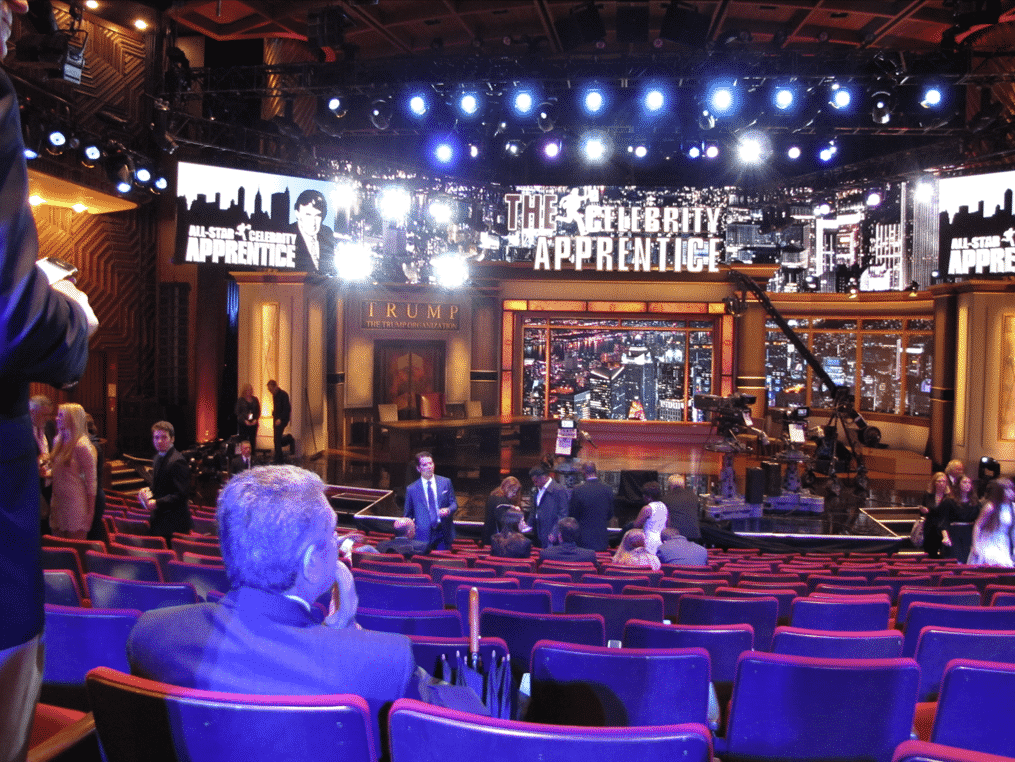 I was literally one of the first people to get a seat.  Back row of the orchestra, dead center. 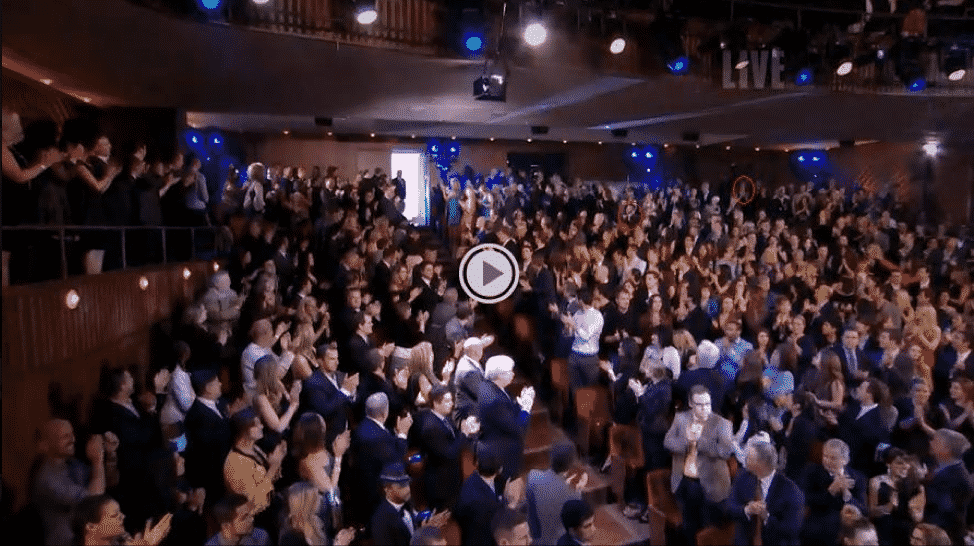 You can see me circled in red in this screen grab from the show.  My girlfriend Molly is also circled in red on the right.  The show was live and it was a two hour season finale so group by group the various celebrities were brought to the stage to talk to Trump.  He would basically ask them why they didn’t make it to the end, and they would respond with some version of  “because you fired me.” 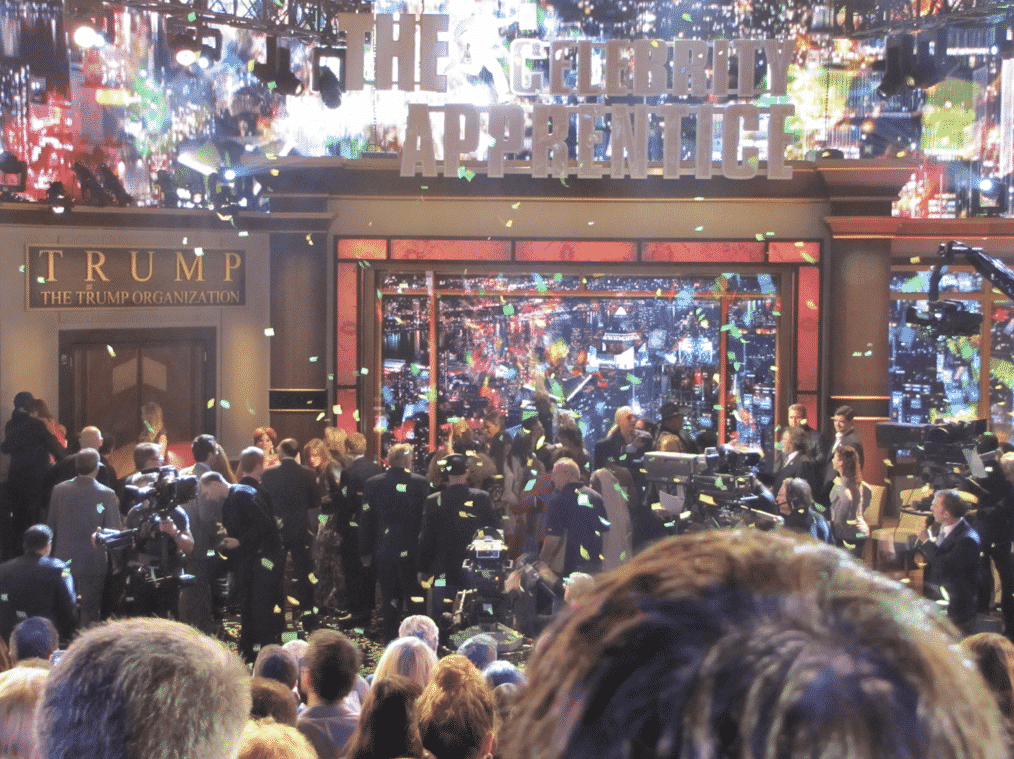 The final two players in the game were magician & comedian Penn Jillette from Penn & Teller vs. a country music star named Trace Adkins. When Trump announced Trace as the winner and fired Penn the confetti came down, the stage was swarmed by the celebrities families, and everybody was happy. 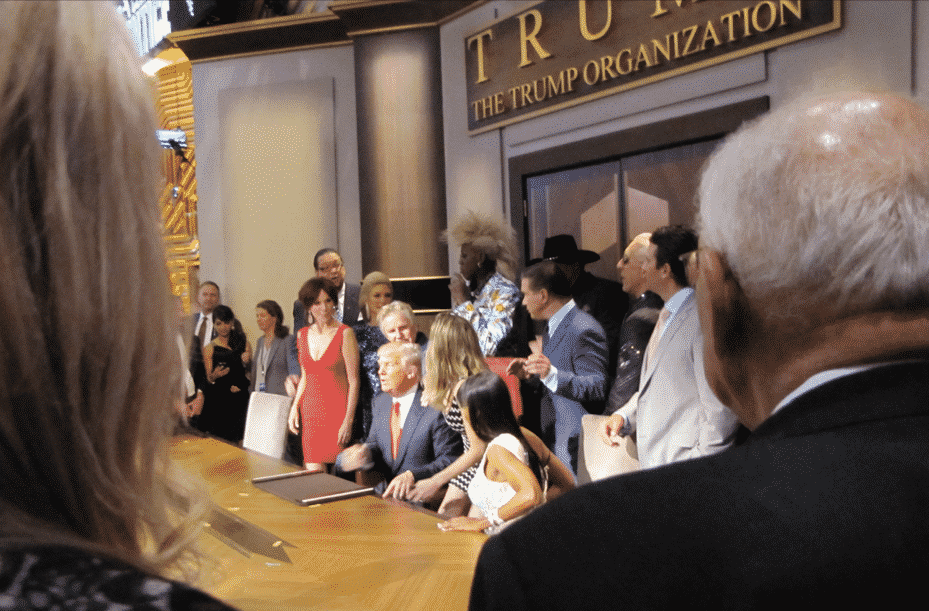 The second cameras went off Molly grabbed me and brought me on stage.  I’m standing behind George (one of the Trump’s judges from earlier seasons).  As you can see it’s a very odd class portrait. 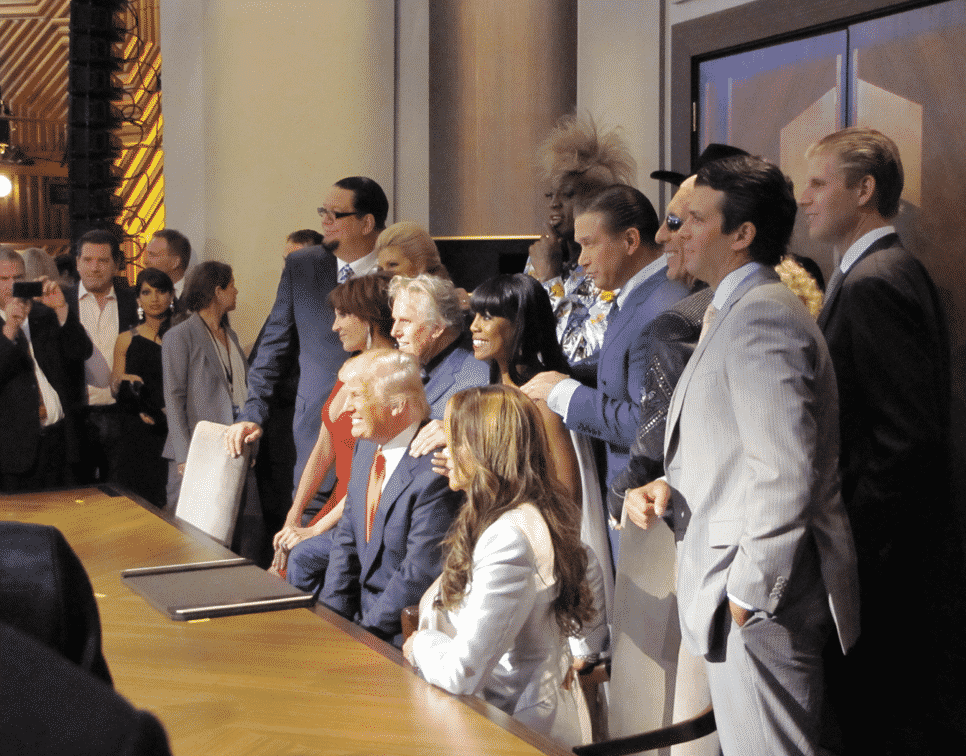 Left to right we see Penn Jillett, Ivanka Trump, Marilu Henner, Gary Busey, Donald Trump, Omarosa (who’s celebrity is entirely a creation of having been on this series), Dennis Rodman, Stephen Baldwin (aka the other Baldwin), La Toya Jackson (aka the other Jackson), Dee “you will never see me without sunglasses” Snider from Twisted Sister, Trace Adkins, Trump Jr. and Trump Jr.

Molly poses in front of the cast as they pose for photos. 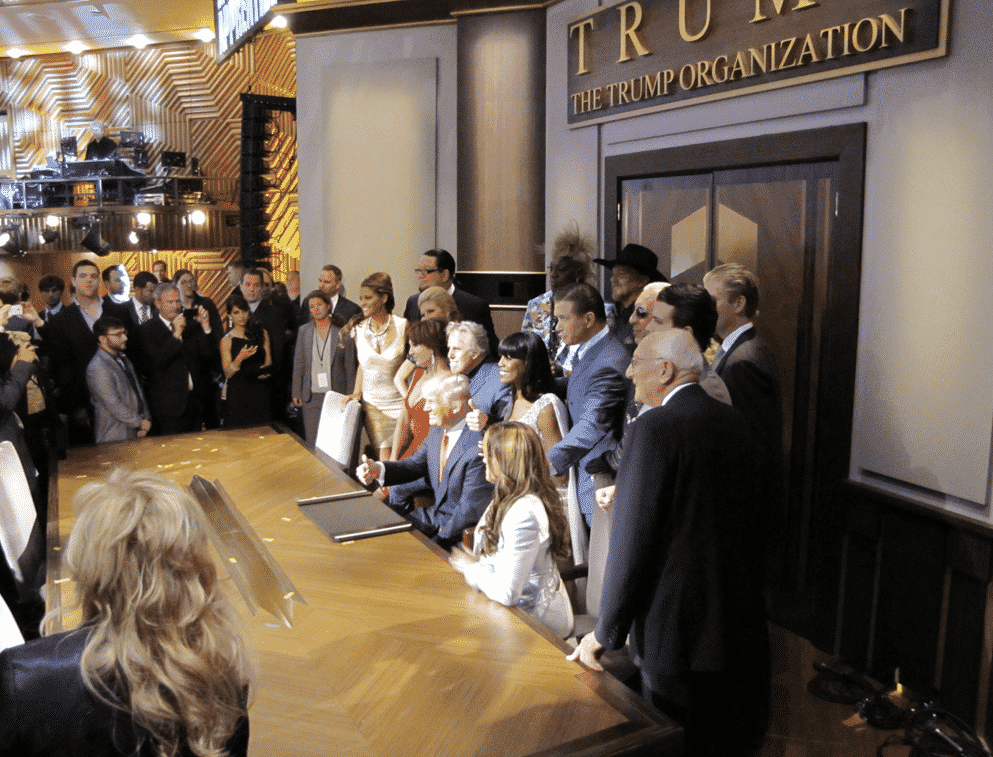 George who was blocking part of my shot joins the cast. 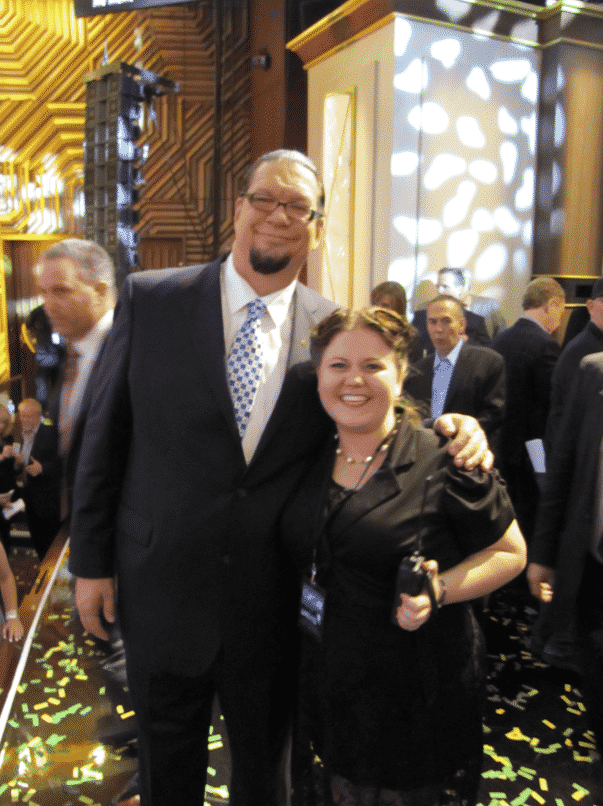 One of the cooler celebrities we ever got to meet, I’m a genuine fan of this guy.  Penn is a genius, and the only reasons he lost to Trace Adkins was because of things he wrote about Trump and his politics in the past, as well as the fact that the show probably has a huge viewership in the South and they wanted to appeal to their target demographic.  I told Penn that we were big fans of Bullshit.  One of only a few people on earth you could utter those words to and it would make them proud.  Molly then said to him “And what happened tonight, that was Bullshit.”  Penn grinned and nodded. You can see Teller and Gilbert Gottfried walking around behind them, not often you get photobombed by Gilbert Gottfried. 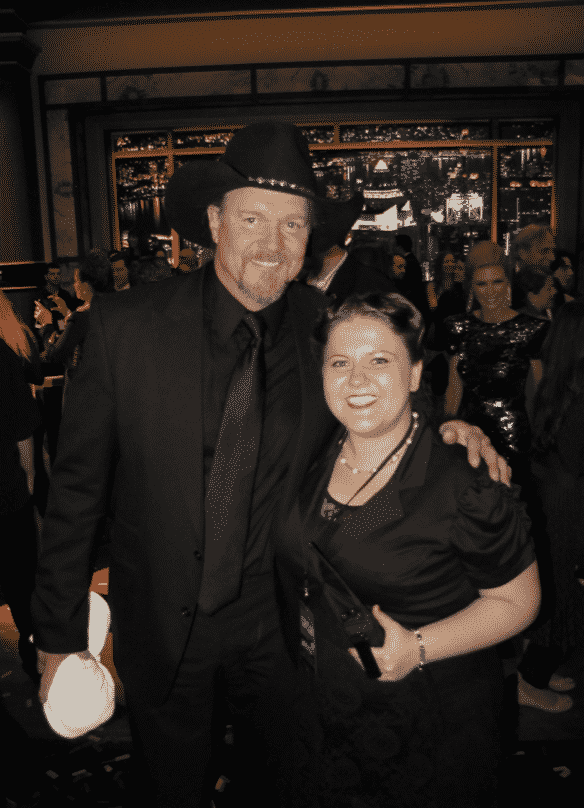 Trace Adkins is a country music star.  Molly’s family is all from Tennessee and this guy was representing Nashville.  Molly said to him “I’m from Murfreesboro.” Trace replied “Are you lost?”  Molly responded “Yeah, pretty much.”  She then told him that it would sure make her momma proud to get a picture with him.  He obliged.  Molly looks really short in these pictures, but both Penn and Trace are 6’6″.  Between them, the 6’7″ Dennis Rodman, Donald Trump at 6’3″ and Dee Snider, and Gary Busey both being over 6′ this had to be one of the tallest non-sports-related reality show casts in history. 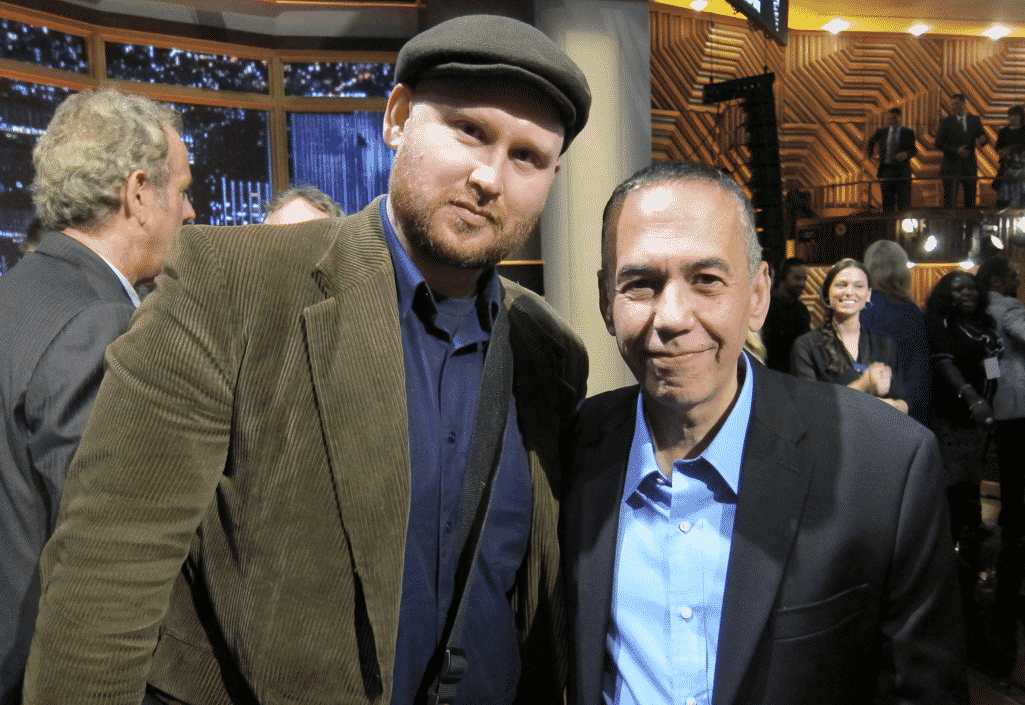 Myself and Gilbert Gottfried. 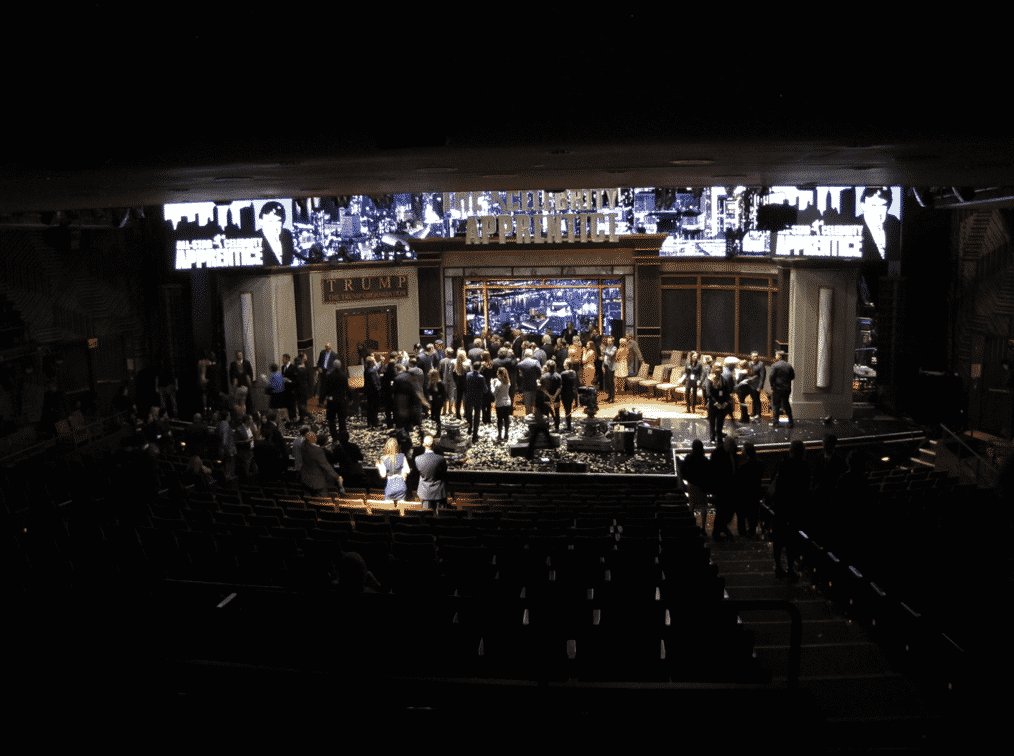 The audience had cleared out, the house lights were dimmed, and for a short while people were still on the stage taking publicity photos and whatnot.  They soon boarded the VIP buses to the wrap party on 42nd Street.  I stuck around with Molly until she closed up the theatre.  We then drove up to the party in our car. It’s amazing how quickly the crew can break down a set.  This is literally 15 minutes after the last of the celebrities left the stage.  Cast was off the stage at 11:30pm, this photo was taken at 11:45 pm. 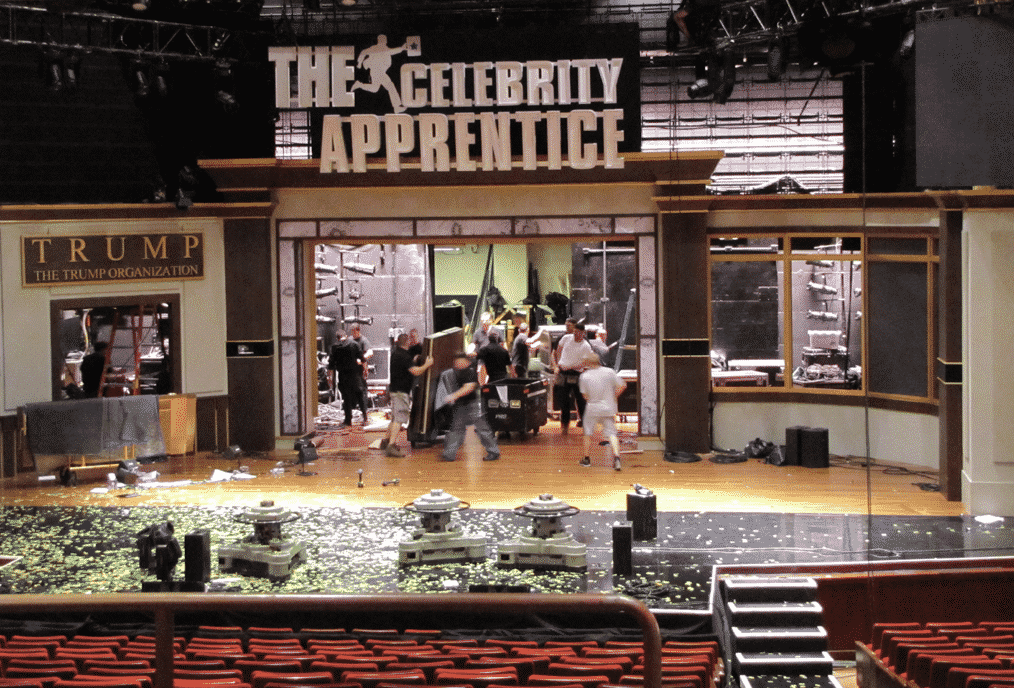 The final contest was designing and marketing an Delish ice cream flavor exclusive to Walgreens.  We got to eat a lot of it at the afterparty.  Penn’s flavor was a Vanilla & Chocolate Magic Swirtle (which was delicious with toppings or without).  Trace had a Maple Macadamia Mash-Up.  I love Maple, and I love Macadamia nuts, but for some reason this ice cream tasted like something you would eat around the holidays if that makes any sense.  It tasted like a flavor you eat around Christmas, not year round, very odd. There was a lot to eat that was cooked, and we were starving.  I started drinking some Cape Codders.  Everything was top shelf. Molly with Hard Rock Johnny looking slimmer than ever. The dance floor wasn’t empty for long.  After people got full and loosened up this floor got packed. I got to meet Lil Jon.  I mentioned to him I had drawn a comic strip with him in it in Complex Magazine in the early 2000s and he knew the name of the strip and started explaining it and shook my hand. Whenever someone draws a celebrity in print they see it and keep that shit. He probably has had it hanging in his office for a decade.

Here is a panel from that Complex Magazine strip.

It was kind of loud in there…as he was talking I wanted to yell “WHATTTTT? WHATTTT?” Dave Chappelle style. Dennis Rodman leaving, when you are 6’7″ with an 8″ Mohawk, a revolving door become a problem. The Celebrity Apprentice spelled out in tiny delicious cupcakes. Molly grabbed one of the golden ones. The most famous circus clown in the world Bello and Molly. Terrific party, so much fun, thanks Trump & NBC. We hit the red carpet once again.